Wilson is a city in Mississippi County, Arkansas, United States. The community is located in the Arkansas Delta and is surrounded by fertile cropland historically used to produce cotton. Wilson started as a company town in 1886 by Robert E. Lee Wilson, who would build a cotton empire and run it from the city. The Wilson Company would become so successful that all of the town's buildings were rebuilt in Tudor Revival architectural style following Wilson's son's honeymoon to England in 1925. Wilson incorporated in 1959, becoming a town with public roads and municipal government. The extensive property holdings of the Lee Wilson and Company remained in the Wilson family until 2010. The community has seen a rapid decline in economic activity and population since the advent of mechanization on the farm, reducing the need for manual labor to produce cotton. The population was 903 at the 2010 census.

Wilson started as a company town for Robert E. Lee Wilson's nearby logging and sawmill operation founded in 1886. The village prospered when Wilson decided to use the cleared land for agriculture instead of selling it after logging. In 1900, a major archaeological find occurred near Wilson when James K. Hampson discovered the Island 35 Mastodon. All residents of Wilson except the postmaster and railroad employees had access to company doctors for $1.25 annually ($15.96 in 2021 dollars), a rarity in the poverty-stricken Arkansas delta. The company also employed people to work in Wilson's basic service industries, such as drycleaning and automobile repair, keeping the standard of living high. 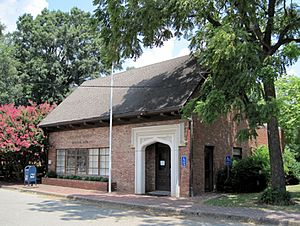 After Wilson's son, Wilson Jr., and his wife returned from their England honeymoon enthralled with the Tudor style in 1925, all subsequent public buildings were built with Tudor architecture, including retrofits to all existing public structures. The town incorporated in 1959, selling the houses to the renters living in them and gaining access to tax income it was previously excluded from as a company entity. As technology advanced on the farm, fewer employees were needed and many moved from Wilson to seek other employment.

According to the United States Census Bureau, the town has a total area of 2.8 km² (1.1 mi²), all land. The area is dominated by the Mississippi River flood plains, trees and fields. Along and parallel to the Tennessee–Arkansas state line, the former course of the Mississippi River as it was before the 1811–12 New Madrid earthquakes is still visible in the landscape almost 200 years after the events. The former riverbed has shrunk to small side arms of the Mississippi River which, dependent on the water level and precipitation, are still partly connected to the river.

The town is located at the intersection of US Route 61 (US 61) and Highway 14. This segment of US 61 through Wilson has been designated as part of Great River Road, a tourist route to display the heritage of communities along the Mississippi River. 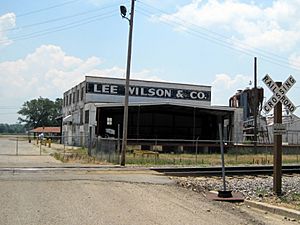 Agriculture is the predominant source of income in the area surrounding Wilson, especially the cultivation of cotton. After the abolition of slavery, sharecropping was the primary means of income for low income families in the area. Mostly for the cultivation of cotton, land would be used by sharecroppers in return for a share of the crop to the landowner. Modern machines like the cotton picker have made the manual cultivation obsolete over time as they took over the work from the hand laborers. 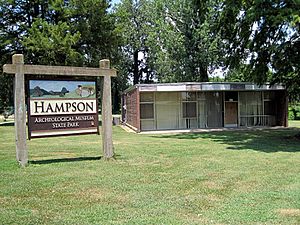 The Hampson Museum State Park in downtown Wilson exhibits an archeological collection of early American aboriginal artifacts from the Nodena Site 5 mi (8 km) east of the town. The museum documents the culture of a civilization which existed in a 15-acre (60,703 m2) palisaded village on a meander bend of the Mississippi River in the area around 1400–1650 CE. Cultivation of crops, hunting, social life, religion and politics of that ancient civilization are topics of the exhibition.

In 1964, the Nodena Site was declared a National Historic Landmark, and was added to the National Register of Historic Places two years later.

The Wilson school district merged into the South Mississippi district in 1968.

All content from Kiddle encyclopedia articles (including the article images and facts) can be freely used under Attribution-ShareAlike license, unless stated otherwise. Cite this article:
Wilson, Arkansas Facts for Kids. Kiddle Encyclopedia.