Osceola is a city in and one of the two county seats of Mississippi County, Arkansas, United States. Located along the Mississippi River within the Arkansas delta, the settlement was founded in 1837 and incorporated in 1853. Occupying an important location on the river, the city's economy grew as steamboat traffic increased. Timber and cotton harvesting would develop, and the city experienced rapid growth and development throughout the early 20th century. The city's economy has since diversified to include a robust industrial sector. The population was 7,757 at the 2010 census.

During the prehistoric period, Osceola and Mississippi County was largely swampland, with dense forest cover. The area was inhabited only by Native American tribes until the first settlers arrived around the time of the Louisiana Purchase in 1803. 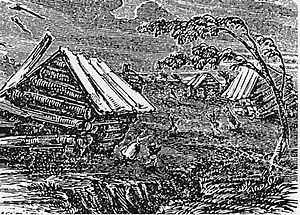 The Great Earthquake at New Madrid, a 19th-century woodcut from Devens' Our First Century (1877)

Initial white visitors to the area were speculators, hunters, and outlaws, but the remote region remained sparsely populated by settlers. An extremely intense New Madrid earthquake swarm, produced by the New Madrid Seismic Zone nearby in present-day Missouri, struck the area in 1811-1812. The results were widespread soil liquefaction and a change in geography that produced "sunken lands", which were sandy berms of silt and sediment disturbed by the earthquakes. Some tracts of land were sunk over 50 feet (15 m), disappeared underneath newly formed lakes (such as Reelfoot Lake in Tennessee), or transformed from green forests to stagnant swamps.

Following continuing speculation and settlement in the area in the years after the earthquakes, two settlers, William Bard Edrington and John Price Edrington negotiated the acquisition of Native American huts along the Mississippi River. By this point, the combination of abundant timber as an obvious economic asset and easy access to shippers and travelers along the river began driving growth in the region. In 1837, the settlement adopted the name Plum Point.

The Plumb Point community had developed into a successful waypoint on the Mississippi as well as a hub for the timber required to power the steamboats now common on America's waterways. Enterprising settlers began to explore the uses for the fertile soils now ripe for row agriculture following clearing of the dense forests. It became apparent that the soil supported cotton extremely well, which was already a popular crop elsewhere in the South due to heavy European demand driven by the Industrial Revolution and resulting high market prices. Farmers from other cotton states began to relocate to Mississippi County and throughout the Arkansas Delta, bringing slaves, "King Cotton" culture and the plantation agriculture lifestyle with them. In 1853, the community had changed from mostly silviculture to agricultural, had a total of 250 residents, and officially incorporated as Osceola. 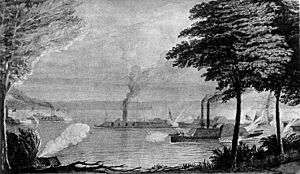 Naval Battle at Fort Pillow, Tennessee, 10 May 1862. Confederate ships are seen at right and Federal ironclads are seen in the center and left.

Osceola strongly supported secession in 1861, and raised a volunteer company called the Osceola Hornets to fight for the Confederacy. The unit was under command of Captain Charles Bowen within the 2nd Confederate Infantry. Osceola saw thousands of Union troops enter the area in 1862 in preparation to assault Fort Pillow and Memphis. On the river, the Battle of Plum Point Bend took place between the Confederate River Defense Fleet and the Union Mississippi River Squadron in 1862. Osceola itself was mostly subject to raids from both armies and guerrilla warfare that resulted in burning, pillaging and damage throughout the city.

Following the Civil War, race relations began to tighten between plantation owners who had lost the slave labor that fueled their successful plantations, poor whites who were suddenly in competition for work and social status with freedmen, and the former slaves who continued to face deprivation of their rights despite the war's outcome. Whitecapping by the Ku Klux Klan and other groups promoted a lawless atmosphere in Mississippi County. Violent encounters with racial tensions were common in Mississippi County and throughout the Arkansas Delta. An extreme example from Mississippi County was nicknamed the Black Hawk War. The racial violence and lawlessness continued to esclate, eventually resulting in Governor Powell Clayton declaring Mississippi County and thirteen other counties under martial law from November 1868 until March 1869. 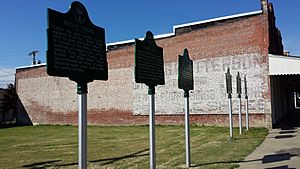 Anchoring the town square is the 1912 neoclassical Mississippi County Courthouse, which a copper roofed dome. The courthouse is bordered by the Hale Avenue Historic District and other structures on the National Historic Register of Historic Places. Visitors will also find the Mississippi County Historical Center located in a 1904 building that once housed a dry goods store.

Osceola is famous for its role in the development of blues music, and many famous blues musicians either came from Osceola or performed there. To celebrate this heritage, Main Street Osceola has been hosting the Osceola Heritage Festival since 1998. 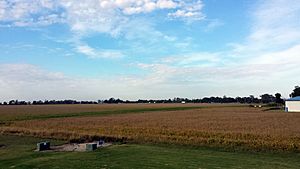 Flat fields in cultivation, such as this one in western Osceola, are typical across the Arkansas Delta

Osceola is within the New Madrid Seismic Zone, a major seismic zone and a prolific source of intraplate earthquakes. The area experienced the highest magnitude earthquake in North America east of the Rocky Mountains in the 1811–12 New Madrid earthquakes. 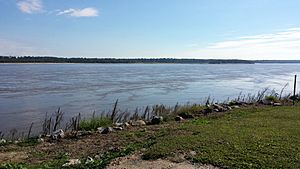 The eastern edge of Osceola is the Mississippi River, which is also the state border between Arkansas and Tennessee. The river has provided opportunity for the Osceola since it was founded as a waypoint for river travelers in 1833. Steamboats allowed Osceola to continue to leverage its position on the river as a shipping port for timber and cotton from the surrounding fields.

Although critical to the growth and development of Osceola, the river has also been a source of adversity for the community. The Great Mississippi Flood of 1927, the most destructive river flood in the history of the United States, and another flood in 1937 both damaged Osceola significantly, displacing hundreds of citizens and ruining crops.

There were 2,724 households out of which 38.5% had children under the age of 18 living with them, 43.3% were married couples living together, 25.2% had a female householder with no husband present, and 27.3% were non-families. 24.4% of all households were made up of individuals and 10.3% had someone living alone who was 65 years of age or older. The average household size was 2.70 and the average family size was 3.20.

All content from Kiddle encyclopedia articles (including the article images and facts) can be freely used under Attribution-ShareAlike license, unless stated otherwise. Cite this article:
Osceola, Arkansas Facts for Kids. Kiddle Encyclopedia.