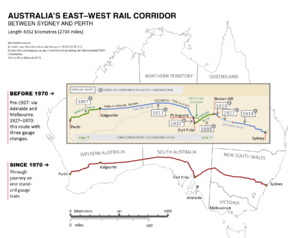 Leaving Kewdale Freight Terminal, Western Australia, is a typical freight train of the East–west rail corridor, with three locomotives totalling 9340 hp (10,490 kW) power output, a crew car, and a train of up to 1.8  km of container cars (many of them double-stacked)

The Sydney–Perth rail corridor is a 1,435 mm (4 ft 8 1⁄2 in) standard gauge railway route that runs for 4352 kilometres (2704 mi) across Australia from Sydney, New South Wales, to Perth, Western Australia. Most of the route is under the control of the Australian Rail Track Corporation.

The corridor is heavily trafficked by long-distance freight trains. As of 2008[update], the rail corridor carried 81 per cent of land freight between the eastern states and Perth, up from 60 per cent in 1996–97; and in November 2007, 3.46 billion gross tonne-kilometres of freight was carried, a record at the time.

As of 2020[update], major freight operators on the corridor included Pacific National, Aurizon, SCT Logistics and One Rail Australia.

The Indian Pacific, an experiential tourism passenger train, operates along the entire route. Its sister train, The Ghan, travels over part of the corridor – from Adelaide to Tarcoola – before it proceeds north to Darwin. Some local passenger services operate at each end (in Western Australia and New South Wales) but not in the central part, in South Australia.

Until the route was converted to standard gauge in 1970, differing choices of track gauges by three state governments required passengers and freight to be trans-shipped at Broken Hill, Port Pirie, and Kalgoorlie. These stations were on the following lines (from east to west):

All content from Kiddle encyclopedia articles (including the article images and facts) can be freely used under Attribution-ShareAlike license, unless stated otherwise. Cite this article:
Sydney–Perth rail corridor Facts for Kids. Kiddle Encyclopedia.