Tarcoola is a town in the Far North of South Australia 416 kilometres (258 mi) north-northwest of Port Augusta. At the 2006 census, the Tarcoola district had a population of 38.

Tarcoola is taken from a non-local aboriginal language from an area around Tarcoola Station in New South Wales; it means river bend. 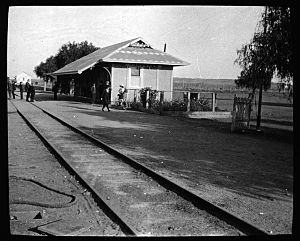 The Tarcoola Goldfield was discovered in 1893, but it was in an isolated arid area, and there was little development until 1900. A Post Office opened on 18 August 1900 and the town was proclaimed on 21 February 1901. It was named after Tarcoola the winner of the 1893 Melbourne Cup horse race. The horse Tarcoola had been raised on Tarcoola Station on the Darling River.

The Trans-Australian Railway was built through Tarcoola in 1915, and in 2004 the Adelaide–Darwin railway diverged from Tarcoola to Darwin.

The town is almost completely deserted today except for transient railway maintenance staff and geological exploration teams. The original Tarcoola goldfields are long closed. However, there is now new exploration for minerals in the wider area, including the Challenger Mine.

The Tarcoola Goldfield, Battery and Township is listed on the South Australian Heritage Register as a designated place of archaeological significance.

The Ghan and the Indian Pacific passenger services through Tarcoola both run once per week in each direction all year round, and twice per week at various times. The mail for Tarcoola arrives by train.

Tarcoola has a desert climate with hot, dry summers and mild winters and sparse rainfall throughout the year.

All content from Kiddle encyclopedia articles (including the article images and facts) can be freely used under Attribution-ShareAlike license, unless stated otherwise. Cite this article:
Tarcoola, South Australia Facts for Kids. Kiddle Encyclopedia.