EastLink is a tollway (meaning people have to pay to drive on it) in Melbourne, Victoria, Australia. It was opened on June 28, 2008. It links the Frankston Freeway to the Eastern Freeway, and includes two tunnels, the Mullum Mullum tunnel and the Melba tunnel.

The interchange with the Monash Freeway, the largest in Victoria, is known as the Tom Wills interchange. This was announced on February 27, 2008. This particular interchange was chosen because it was within a short distance from Waverely Park, and the home of the Hawthorn Football Club.

Tolls are paid by either a bill sent in the mail, buying a pass from a shop or creating an account and using an electronic Breeze tag or another tollways type of electronic tag in the car to keep track of tolls. The cost of the tolls is charged against the owner's account. 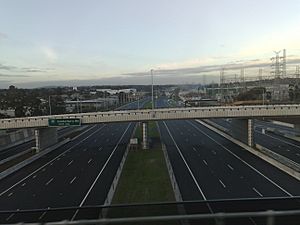 The EastLink tollway at Canterbury Road 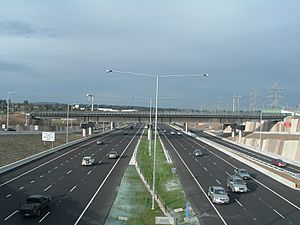 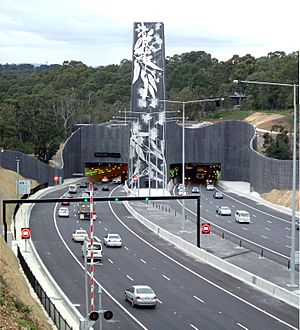 The entry to the Mullum Mullum tunnel

All content from Kiddle encyclopedia articles (including the article images and facts) can be freely used under Attribution-ShareAlike license, unless stated otherwise. Cite this article:
EastLink, Melbourne Facts for Kids. Kiddle Encyclopedia.