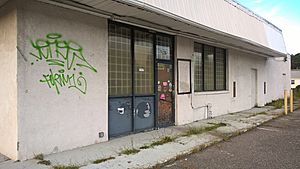 Graffiti in the East End

Located in the older portion of the port city near the harbor of Hampton Roads, the East End is characterized by coal storage and shipping facilities, dock areas for small fishing and sightseeing ships and tugboats, and low income housing. The residential portion includes public housing projects and it is considered an impoverished and crime-ridden neighborhood. Large numbers of homeless people are present in the East End.

These statistics are derived from the 2010 United States Census, defining the "East End" as census tracts 301, 303, 304, 305, 306, and 308 in Newport News, Virginia. Please note that there is no exact definition of the boundaries of the "East End" and therefore, the following statistics should be considered approximate.

In 2014, the number of homicides in the area almost doubled compared to the previous year, 2013. A local resident stated that it seemed like every time they "picked up a newspaper or turned on the TV" someone had been shot and killed. Another resident stated that the violence was "getting worse". Police stated that they would try to create better community relations to reduce the violence. One woman was killed by a stray bullet while sleeping in her own home.

In spring of 2015, over a 30 days period, just one street experienced four shootings and eight casualties. The Newport News Police Department responded by increasing patrols in the area, describing the area's violence as "spiraling out of control".

All content from Kiddle encyclopedia articles (including the article images and facts) can be freely used under Attribution-ShareAlike license, unless stated otherwise. Cite this article:
East End (Newport News, Virginia) Facts for Kids. Kiddle Encyclopedia.