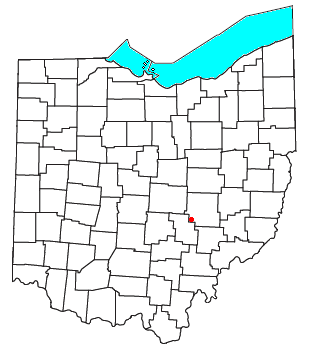 East Fultonham is a census-designated place in central Newton Township, Muskingum County, Ohio, United States. It has a post office with the ZIP code 43735. It is located along U.S. Route 22 a short distance east of the village of Fultonham.

East Fultonham had its start when the railroad was extended to that point. The community was named for its location east of Fultonham.

It is noted as the birthplace of U.S. Vice President Thomas A. Hendricks. A private lake and beach club, Lake Isabella, has been a popular summer destination since 1939.

All content from Kiddle encyclopedia articles (including the article images and facts) can be freely used under Attribution-ShareAlike license, unless stated otherwise. Cite this article:
East Fultonham, Ohio Facts for Kids. Kiddle Encyclopedia.