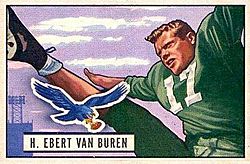 Harry Ebert Van Buren (December 6, 1924 – June 14, 2019) was an American football player. He played as a fullback and halfback. He played for the Philadelphia Eagles in the National Football League (NFL) between 1951 and 1953. His brother, Steve Van Buren, was his teammate during the 1951 season. Van Buren went to Louisiana State University and was added to the LSU Athletic Hall of Fame in 2015.

All content from Kiddle encyclopedia articles (including the article images and facts) can be freely used under Attribution-ShareAlike license, unless stated otherwise. Cite this article:
Ebert Van Buren Facts for Kids. Kiddle Encyclopedia.