Echuca ( ə-CHOO-kə) is a city on the banks of the Murray River and Campaspe River in Victoria, Australia. On the other bank of the Murray is the New South Wales town of Moama. Echuca is the administrative centre and largest town in the Shire of Campaspe. In 2011 there were 13,708 people living in Echuca.

Echuca is an Aboriginal word meaning "Meeting of the Waters". Echuca is close to the junction of the Goulburn, Campaspe and Murray Rivers. It is the closest point of the Murray to Melbourne. This meant it developed as a river port during the 19th century.

The main industry in Echuca is tourism. Tourism earns about $250 million a year for the Echuca economy. Visitors are attracted to the town by its warm climate, the Murray River, recreational attractions, and historical features, some of which have come to public awareness by the Nancy Cato novel All the Rivers Run which was made into a TV miniseries. These include the Port of Echuca which has the world's largest fleet of operating paddle steamers.

Agriculture is very important to the region and dairy, wheat, sheep, pig, and cattle farms are all within close proximity. 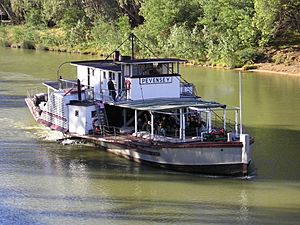 The port is home to the largest paddle steamer collection in the world, which includes the world's oldest operating wooden hulled paddle steamer, the PS Adelaide built in 1866. There are several historic vessels operating out of Echuca on a daily commercial basis such as PS Pevensey (built 1911), PS Alexander Arbuthnot (built 1923), PS Adelaide (built 1866) operating from the wharf and the PS Emmylou (built 1980 with a steam engine in use from 1906), PS Canberra (built 1913) and PV Pride of the Murray (built 1924 as a logging barge C24) operating from Riverboat Dock, a short distance downstream from the main wharf. These vessels conduct between 4-6 1hour cruises daily, while the PS Emmylou offers 1.5 hour lunch cruises twice daily and 2 x 1hour cruises daily, and in peak seasons 2-3hour dinner cruising and 1,2 & 3 night accommodated cruises for up to 18 passengers. There are also a number of privately owned paddle steamers in Echuca. As well as the paddle steamers there are numerous houseboats, many of which can be hired. The MV Mary Ann (built 1981) operates as a cruising restaurant in busier times.

The Port of Echuca is also restoring the PV Success to full working order. When operational, it will be added to the fleet of paddle steamers at Echuca Wharf.

In 1984, the Australian television mini-series, All the Rivers Run, based on a novel by Nancy Cato and starring Sigrid Thornton and John Waters, was filmed in and around Echuca. The local paddle steamers PS Pevensey and PS Emmylou featured in the mini-series as the PS Philadelphia and PS Providence, respectively. The airing of this series around Australia and internationally revitalised Echuca's tourism economy.

In 1985, parts of the Australian telemovie My Brother Tom (based on the book by James Aldridge) were filmed in Echuca.

In the TV series Glitch, Vic, the district supervisor for the police forces of Echuca, the fictional Yoorana, and surrounding communities, is based in Echuca.

Echuca is renowned for its variety of restaurants and eating services available. International cuisines are all easily accessible in the town including Thai, Chinese, Italian, Indian and Greek. Another major aspect of Echuca's tourism is the well known wharf-side restaurant "Oscar W's", currently closed for renovations but a popular attraction for rural weddings and fine dining due to its allocation of a 2013 AGFG Chef's Hat. 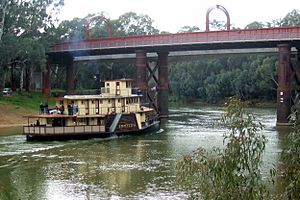 Echuca is connected over the Murray River to Moama by the Echuca-Moama Road Rail Bridge. This historically significant bridge has riveted iron spans supported on cast iron pillars. Trains no long run on this bridge; a dedicated rail bridge has been constructed next to the old bridge, which now only carries road vehicles.

All content from Kiddle encyclopedia articles (including the article images and facts) can be freely used under Attribution-ShareAlike license, unless stated otherwise. Cite this article:
Echuca, Victoria Facts for Kids. Kiddle Encyclopedia.