Moama ( or) is a town in the Riverina district of southern New South Wales, Australia, in the Murray River Council local government area. The town is directly across the Murray River from the larger town of Echuca in the neighbouring state of Victoria, to which it is connected by a bridge. At the 2016 census, Moama had a population of 5,620.

The settlement where Moama now stands was founded by James Maiden in the mid-1840s, beginning as a stopping-point for stock and cargo waiting to cross the Murray River by punt. Maiden arrived in the district in 1840; he had been hired to caretake Jeffries' station about 40 kilometres (25 mi) from the junction of the Campaspe River and the Murray River. He recognised a business opportunity and travelled to Seymour where he built a punt, which he then transported back to the Murray. The locality where the punt was placed on the river became known as Maiden's Punt. Maiden built a wooden public house, the Junction Inn, for which he obtained a licence in 1847.

During this early period Maiden's punt operated in opposition to another punt, owned by Isaac White, which was worked from the southern bank at Campaspe Junction (now Echuca). However, it was Maiden's punt that captured most of the business. 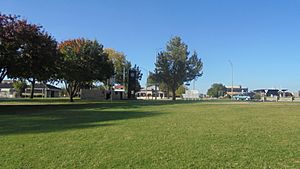 A park in Moama, NSW

A demand for land at Maiden's Punt prompted the New South Wales government to lay out a township there, named "Moama". The name is derived from a local indigenous word meaning "burial ground". The Moama township was gazetted on 16 December 1851. The post office opened on 1 January 1855 and was known as Maiden's Punt until 1857.

At a land sale in August 1855 James Maiden purchased 10 of the 30 lots sold. Maiden sold the Junction Inn to Jeremiah Rolfe in 1855, but the next year he repurchased it. When applying for a licence he told the Bench of Magistrates that he "intended to conduct it in a very superior manner with reduction of charges." Maiden also intended expanding the hotel, utilising the brick house which was his former residence as accommodation "for the use of gentlemen and their families to and from Melbourne".

The growth of the paddlesteamer as a means for transporting cargo from the 1860s onwards saw both Moama and Echuca grow substantially. Echuca's large wharf and its relatively short distance to Melbourne saw it overshadow its cross-border neighbour.

A traveller passing through Moama in mid-1865 described the township thus: "Here are erected a few straggling houses of wood or brick". By that stage Moama and Echuca were connected by a pontoon bridge, which, though too narrow for drays or coaches, was used for crossing sheep and horses. 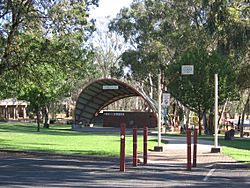 The sound shell on the river foreshore at Moama.

Moama currently has a permanent population of about 3700, although this swells significantly during holiday periods and the Southern 80 Water Ski race, held in February.

The town has recently undergone a massive resurgence in people moving from Melbourne seeking a "tree change". The Murray Shire Council has approved new developments in retail, sporting and residential sub divisions. Located just outside Moama is the "Heartland" Speedway. 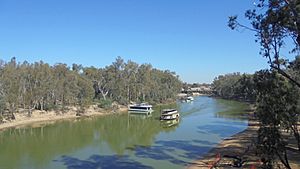 The State of New South Wales takes in the Murray River up to the top of the riverbank on the Victorian side. The NSW Waterways Authority is a self-funding regulatory authority to ensure the safe and environmentally responsible use of NSW waterways including the Murray by all boat operators. New South Wales Police Force members attached to the Moama Police Station also patrol the Murray River in NSW Police Launch "Moama". 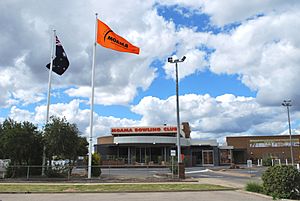 During the 1980s Moama received thousands of visitors each week from Melbourne, due to New South Wales' more liberal gambling laws and the presence of poker machines in some of Moama's entertainment venues. The legalisation of poker machines in Victoria killed off these day tours, although poker machines are still a significant tourist drawcard in the town.

A significant fire occurred at the Moama Bowling Club in June 2008, with an estimated damage bill of $3 million AUS.

James Rogers, who served in South Africa during the Boer War and was awarded the Victoria Cross, was born in Moama in 1875.

Mary Jeanette Robison known professionally as May Robson, the American-based actress whose career spanned 59 years from 1883 to 1942, was born in Moama in 1858.

Isaiah Firebrace (winner of the eighth season of The X Factor Australia & 2017 Eurovision entrant) grew up in Moama.

All content from Kiddle encyclopedia articles (including the article images and facts) can be freely used under Attribution-ShareAlike license, unless stated otherwise. Cite this article:
Moama Facts for Kids. Kiddle Encyclopedia.