Edward Schultz (January 27, 1954 – July 5, 2018) was an American television and radio host. His shows are about liberal politics. He had been a conservative before becoming liberal. He hosts The Ed Show on MSNBC and Ed Schultz Show on the radio.

He was born in Norfolk, Virginia. He hosted at many local stations in Fargo, North Dakota and its nearby areas.

In the 2016 presidential election, Schultz endorsed U.S. Senator Bernie Sanders for President of the United States. 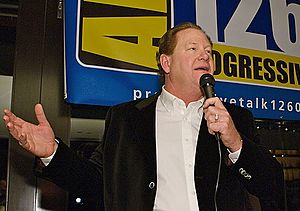 All content from Kiddle encyclopedia articles (including the article images and facts) can be freely used under Attribution-ShareAlike license, unless stated otherwise. Cite this article:
Ed Schultz Facts for Kids. Kiddle Encyclopedia.