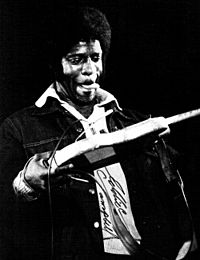 Eddie C. Campbell (May 6, 1939 – November 20, 2018) was an American blues guitarist and singer in the Chicago blues scene. He was born in Duncan, Mississippi, but raised in Chicago. Campbell's debut album, King of the Jungle was released in 1977. Campbell's last album was Spider Eating Preacher (Delmark, 2012). It was nominated for a Blues Music Award in 2013 in the category Traditional Blues Album.

Campbell died in Oak Park, Illinois on November 20, 2018 from complications of a stroke, aged 79.

All content from Kiddle encyclopedia articles (including the article images and facts) can be freely used under Attribution-ShareAlike license, unless stated otherwise. Cite this article:
Eddie C. Campbell Facts for Kids. Kiddle Encyclopedia.