Edmund B. Delabarre facts for kids 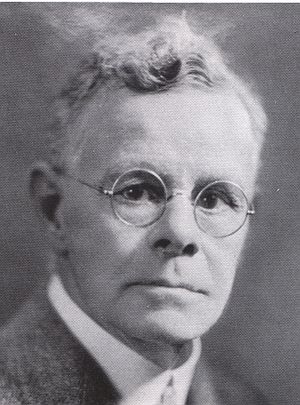 Edmund Burke Delabarre (1863 – 1945), was a researcher and professor of psychology at Brown University. He graduated from Amherst College in 1886. He was a pioneer in the field of shape perception and on the interaction between mental processes and the involuntary movements of the body.

He became famous, particularly in Portugal, because of his interpretation of the inscriptions present on the surface of Dighton Rock, a boulder on the shore of the Taunton River, in southeastern Massachusetts. He attributed the carvings to Miguel Corte-Real, a Portuguese navigator who left Lisbon in May 1502 on an exploration trip to the western Atlantic, never to return. Delabarre claimed that the stone bears carvings of the coat of arms of Portugal, the name of Miguel Corte-Real, and the date 1511.

In 1899, Delabarre was instrumental in formation of the University Club in Providence

All content from Kiddle encyclopedia articles (including the article images and facts) can be freely used under Attribution-ShareAlike license, unless stated otherwise. Cite this article:
Edmund B. Delabarre Facts for Kids. Kiddle Encyclopedia.