Edward Bancroft Williston (July 15, 1837 – April 24, 1920) was a brigadier general in the United States Army. He was a recipient of the Medal of Honor for gallantry during the American Civil War.

Williston was born in Norwich, Vermont, and graduated from Norwich University in 1856. Earlier that year, he was one of the first initiated members of Theta Chi fraternity at the school.

On August 5, 1861, Williston was commissioned in the 2nd United States Artillery as a second lieutenant in San Francisco, California. Later that year, on September 27, he was promoted to first lieutenant. On June 12, 1864, Williston received the Medal of Honor for his actions at Trevilian Station, Virginia as part of Battery D, 2nd United States Artillery, as part of the famed U.S. Horse Artillery Brigade. The medal citation is for his "distinguished gallantry in action at Trevillian Station, Virginia, June 2, 1864." 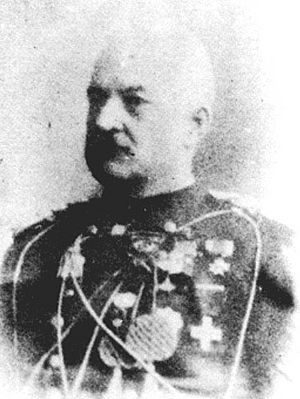 However it was not until March 22, 1885, before Williston was permanently promoted to major in the 3rd U.S. Artillery, reaching lieutenant colonel ten years later on February 12, 1895. He reached full colonel in the 6th U.S. Artillery on March 8, 1898.

Married to Flora E. Chatfield Williston (1861–1944), Williston retired to Portland, Oregon, and died there on April 24, 1920. He was buried at Arlington National Cemetery, with his wife being buried next to him twenty four years later.

All content from Kiddle encyclopedia articles (including the article images and facts) can be freely used under Attribution-ShareAlike license, unless stated otherwise. Cite this article:
Edward Bancroft Williston Facts for Kids. Kiddle Encyclopedia.