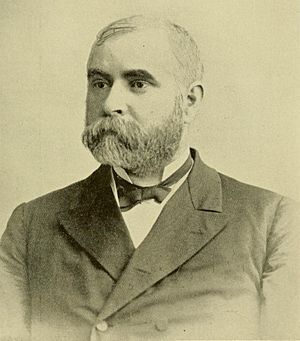 From 1893's History of the Army of the Potomac

Edwin Sylvanus Osborne (August 7, 1839 – January 1, 1900) was a Republican member of the U.S. House of Representatives from Pennsylvania.

Edwin S. Osborne was born in Bethany, Pennsylvania. He attended the public schools and the University of Northern Pennsylvania at Bethany. He graduated from the New York State and National Law School at Albany, New York, in 1860. He was admitted to the bar and practiced law in Wilkes-Barre, Pennsylvania. He entered the Union Army on August 30, 1862, as captain of Company F, One Hundred and Forty-ninth Regiment, Pennsylvania Volunteer Infantry. He was promoted to major of that regiment on February 25, 1865, and served until honorably discharged on July 25, 1865.

Osborne elected as a Republican to the Forty-ninth, Fiftieth, and Fifty-first Congresses. He was not a candidate for renomination in 1890. He was a delegate to the 1888 Republican National Convention. He resumed the practice of law in Wilkes-Barre. In 1898 he moved to Washington, D.C., and lived in retirement until his death on January 1, 1900. Interment in Arlington National Cemetery.

All content from Kiddle encyclopedia articles (including the article images and facts) can be freely used under Attribution-ShareAlike license, unless stated otherwise. Cite this article:
Edwin Sylvanus Osborne Facts for Kids. Kiddle Encyclopedia.