Ekushey Padak (Bengali: একুশে পদক) is one of the highest civilian awards in Bangladesh. In was introduced in memory of the martyrs of the Language Movement of 1952 (Bengali: বাংলা ভাষা আন্দোলন).

The award consists of 100,000 Taka, an 18 carat gold medal weighing 3 tolas. It also includes a certificate of honour. The medal was designed by the artist Nitun Kundu. The amount of the cash reward was originally 25 thousand taka, but it was increased to 100 thousand taka. The Ministry of Cultural Affairs manages the Padak. 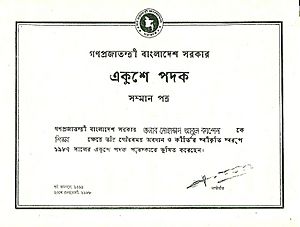 Certificate of Ekushey Padak given to Principal Abul Kashem

All content from Kiddle encyclopedia articles (including the article images and facts) can be freely used under Attribution-ShareAlike license, unless stated otherwise. Cite this article:
Ekushey Padak Facts for Kids. Kiddle Encyclopedia.