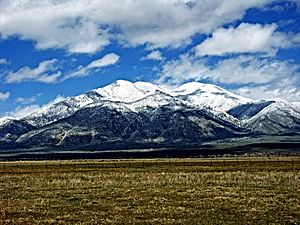 El Prado is an unincorporated suburb of Taos, in Taos County, New Mexico, United States. El Prado is located at latitude 36.449 and longitude 105.576. It is bounded on the east by the town of Taos, and to the north by Taos Pueblo lands. The elevation is 7,123 feet.

El Prado is the home of the nonprofit Metta Theatre and Metta Young Artists, who train, produce and perform there.

All content from Kiddle encyclopedia articles (including the article images and facts) can be freely used under Attribution-ShareAlike license, unless stated otherwise. Cite this article:
El Prado, New Mexico Facts for Kids. Kiddle Encyclopedia.