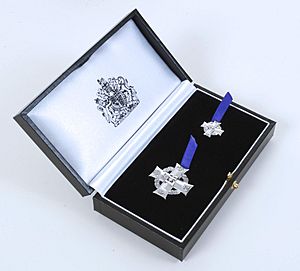 The medal, and a miniature version, are presented in a black leather-style presentation box with the Royal Cypher on the lid and the Royal Coat of Arms on the inner silk lining.

The Elizabeth Cross is an award within the British honours system that is issued to the next of kin of a service man or woman who died due to enemy action or terrorism since 1949. The award comes with a memorial scroll that contains the dead persons name, when they died and has the Queen's signature on it. It is the most recent medal, honour or award to bear the name of a reigning monarch of the United Kingdom since the George Cross. It is not an award for valour or bravery. It is in the shape of a cross with four equal sides that contains flowers at the end of each arm that represents the four countries within the union of the United Kingdom of Great Britain and Northern Ireland. The medal also contains a laurel wreath behind the cross and bears the dead person's name on the back. The medal comes with a miniature (small version) medal for day wear. The medal can only be worn by the next of kin and for anyone else to wear it (even if related to the person who died) is a criminal offence.

All content from Kiddle encyclopedia articles (including the article images and facts) can be freely used under Attribution-ShareAlike license, unless stated otherwise. Cite this article:
Elizabeth Cross Facts for Kids. Kiddle Encyclopedia.