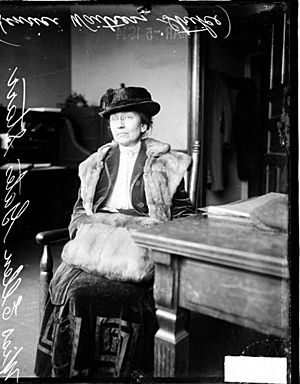 Ellen Gates Starr (March 19, 1859, near Laona, Illinois – February 10, 1940, in Suffern, New York) was an American social reformer and activist. Along with Jane Addams, in 1889, she and Addams found the Hull House in Chicago, Illinois. Starr was a lesbian. She was a member of the Women's Trade Union League and helped organize striking garment workers in 1896, 1910, and 1915. She worked with many other reformers such as Susan B. Anthony and Alice Paul.

All content from Kiddle encyclopedia articles (including the article images and facts) can be freely used under Attribution-ShareAlike license, unless stated otherwise. Cite this article:
Ellen Gates Starr Facts for Kids. Kiddle Encyclopedia.