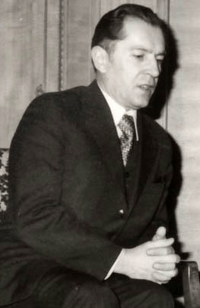 Emil Wojtaszek (27 August 1927 – 17 June 2017) was a Polish politician. He served as the minister of foreign affairs of the People's Republic of Poland from 1976 to 1980. He was a member of the Polish United Workers' Party. He was born in Kraków, Poland.

All content from Kiddle encyclopedia articles (including the article images and facts) can be freely used under Attribution-ShareAlike license, unless stated otherwise. Cite this article:
Emil Wojtaszek Facts for Kids. Kiddle Encyclopedia.