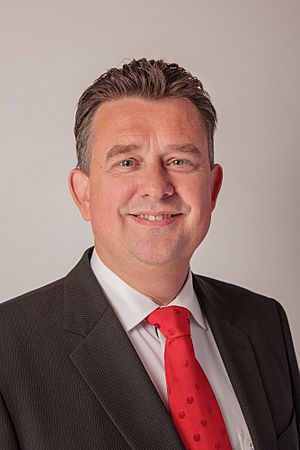 Emile Gerardus Maria Roemer (born August 24, 1962 in Boxmeer) is a Dutch politician of the Socialist Party (SP). He was political and parliamentary leader from March 5, 2010 until December 13, 2017. His successor is Lilian Marijnissen.

Roemer is a former school teacher.

All content from Kiddle encyclopedia articles (including the article images and facts) can be freely used under Attribution-ShareAlike license, unless stated otherwise. Cite this article:
Emile Roemer Facts for Kids. Kiddle Encyclopedia.