The Engineering Corps Memorial Centre (ECMC) is a museum, library and chapel complex located at Linton Military Camp, south of Palmerston North, New Zealand. The centre focuses on the preservation of history and heritage of the Corps of Royal New Zealand Engineers (RNZE).

In January 1964, the RNZE Corps Committee commenced proposals for a Corps Memorial Centre within Linton Camp, where the RNZE was the main Corps in residence. Colonel Andrew Murray, Colonel Commandant at the time, Major George Bunce and Major H.I. (Fritz) Dowrick were involved in discussing and developing the proposal. The future site of the centre was surveyed by Majors Eddie Farnell and Charles Kibblewhite and by May 1968 Dudley Roy, RNZE veteran and architect, had preliminary plans drawn up.

The principles behind the establishment of the RNZE Corps Memorial Museum and Library are two-fold.

1. To enrich the cultural life in RNZE by collecting, sorting, displaying, fostering and promoting the military history of the Corps of RNZE.

2. To work within the New Zealand Defence Force, the Corps of RNZE, and serving and former RNZE personnel to provide a suitable venue where historical artifacts may be brought together as a research and developmental resource for all, to grow their interests and to encourage and support their understanding of the history of the Corps of RNZE.

The original concept was a complex comprising a museum, library, chapel and social room. Several options were considered for the museum including converting an old army cookhouse and mess hall from the wartime establishment facilities within Linton Camp. Until the museum was actually built, old World War 2 company stores were used as temporary storage and display sites.

The museum and library were completed and opened on 30 January 1982 by the Chief of General Staff, Maj. Gen. R.G. Williams and the Colonel Commandant of RNZE Lt Col. Ken Christie.

As of 2016, the ECMC consists of the all the original complex sections, except the social room, which has been assigned to Queen Alexandra's Mounted Rifles. The museum hosts a monthly military history talk, with a wide range of New Zealand and global military topics, which are open to the public as well as soldiers stationed at Linton Military Camp.

The museum consists of collections such as badges, medals, currencies, equipment, maps, memorabilia, presentations, references, reports, uniforms, war art, etc. The collections are displayed outlining the chronology of the Corps, defined by its unique missions and global conflicts. 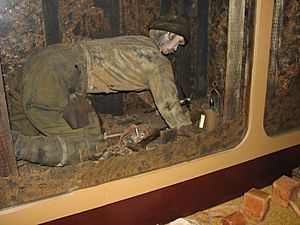 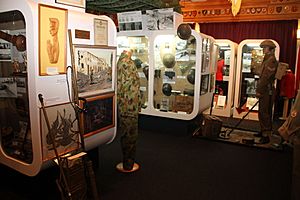 Several artifact exhibitions demonstrate the use and the range of roles that the Royal New Zealand Engineers had including, communications, calculations, surveying, bridging, demolitions and water supply.

Within the museum building, houses the Kitchener Silver collection presented to the RNZE by the Kitchener family (Estate of Field Marshall Lord Kitchener), along with a range of other cups, plates, silverware, trophies, and medal collections.

The library contains over 5,000 items of reference material and acts as the "Technical Information Center" for the RNZE. The literature covers general and combat engineering, general and military history, professional papers, and records. Within the collection, there are military training manuals from Australia, New Zealand, the United Kingdom and the United States of America. The library, having a focus on the RNZE, contains past deployment reports and project documents, as well as unit history sheet records. In addition to literature, photo albums and pictorial records visually cover the extensive history of the engineering corps. 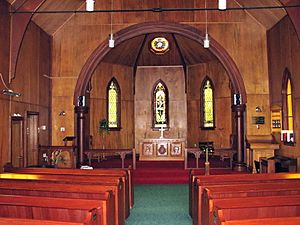 The chapel, named "The Corps of Royal New Zealand Engineers Memorial Church of St Martin’s" is a fully functioning (non-denominational) church, managed by the local chaplaincy and houses the NZE/RNZE Rolls of Honor, the Royal Engineers (UK) stained glass window badge, a Royal Australian Engineer presentation prayer desk, the NZ Railway Engineers commemorative window, a number of other related Rolls of Honor and memorial plaques to deceased RNZE personnel mounted on the ends of the pews.

In April 1972, Army Headquarters in Wellington advised the Corps Memorial Committee that a church at Raetihi, then called Makotuku, built in 1899, had been offered to Linton Camp as a Garrison Church. It was suggested that the RNZE Corps Memorial Association might be interested in assisting with the finance for the removal and re-erection of the church in Linton Camp. It was then envisioned that the church would become the place of enshrinement of the Rolls of Honour of the Corps and would also form part of the RNZE Corps Memorial.

In late November 1972 the foundations for the church were built at Linton by the 2 Field Squadron. The church was dismantled at Raetihi and transported in parts to Linton, where it was rebuilt, led by Sgt Murray Holt as task foreman. By July 1974 the chapel was rebuilt at Linton Camp. On 20 July 1974 a parade of the Sapper units at the camp was held with music provided by the Palmerston North Salvation Army Band.

All content from Kiddle encyclopedia articles (including the article images and facts) can be freely used under Attribution-ShareAlike license, unless stated otherwise. Cite this article:
Engineer Corps Memorial Centre Facts for Kids. Kiddle Encyclopedia.