English claims to the French throne facts for kids 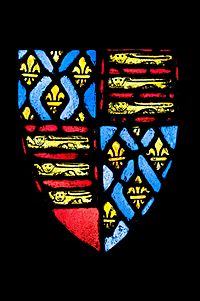 English stained glass window from c. 1350–77, showing the coat of arms of Edward III, which featured the three lions of England quartered with the fleurs-de-lys of France. 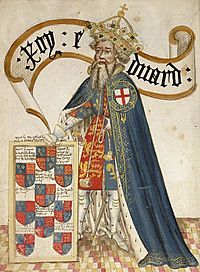 From 1340-1800 many English and later British monarchs claimed the throne of France. The origin of the claims come from Edward III's territorial claims of France which he claimed gave him the right to be king. He tried to take the throne of France and started the Hundred Years' War. 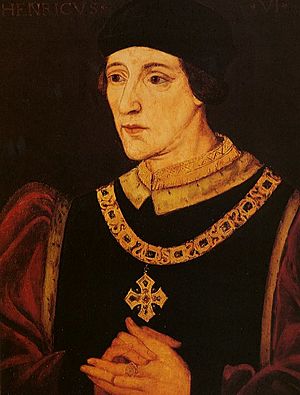 The first English monarch to completely rule France for majority of his reign.

Henry VI was made to be successor of French king Charles VI and on October 21st 1422 took up the position of the French king. He was said to rule the whole of France but in reality only ruled small parts of the north. Charles VII was later crowned as king of France, son of Charles VI starting a small line of disputed monarchs and the English, later British monarch claiming the throne of France for another 350 years.

Edward IV also claimed the throne of France during Henry VI's absence from the English throne and his claims happened in between Henry's so reign of the monarch may not be in perfect order for this list. The claim was of France but really monarchs only ruled Calais due to the terrible general skills of the Duke of Somerset, a close friend of Margaret of Anjou and Henry VI. 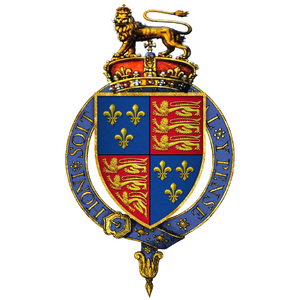 Phillip II of Spain/Phillip I of England who ruled with Mary did claim Calais and partially rule it but he is considered a co-king of the Tudor dynasty and will not be counted as a legitimate Calais ruler or English king and more of a co-king/consort.

English and Scottish claims refer to claims made after the 1603 union between the English monarch and the Scottish monarch when Scottish king James VI became English king James I uniting the kingdoms under one king. However they remained geo-politically separate until the 1707 Acts of Union which united Scotland and England (including the Principality of Wales) into one nation now named Great Britain as of 1707, later the United Kingdom in 1800, the year George III dropped his claim.

All content from Kiddle encyclopedia articles (including the article images and facts) can be freely used under Attribution-ShareAlike license, unless stated otherwise. Cite this article:
English claims to the French throne Facts for Kids. Kiddle Encyclopedia.