Enigma is a town in Berrien County, Georgia, United States. The population was 1,278 at the 2010 census. It has frequently been noted on lists of unusual place names.

Enigma is a small town in South Georgia located in the northwest tip of Berrien County, 9 miles (14 km) east of Tifton, on U.S. Highway 82. The town was founded between 1876-1880 by John A. Ball. It did not start out named "Enigma". Originally a settlement, it was commonly referred to as "Gunn and Weston" until Ball decided he wanted a real name for this town. Two names, "Lax" and "Enigma", were proposed to state officials for review. Lax was already taken by another nearby settlement, and so "Enigma" became the official name. Enigma is an odd name for a town; by definition it means a puzzle or mystery. Ball said, "It was a puzzle what to name it anyway." The town was incorporated on August 21, 1906. 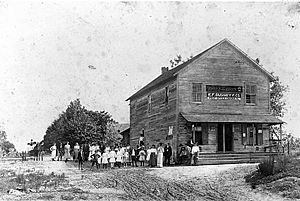 Ball and his family originated in Raleigh, North Carolina, traveling to Georgia on the Brunswick and Western Railroad. He became the town's first postmaster, and not long afterward, Capt J.B. Gunn from Terrell County, Georgia, came as an assistant. Ball and his son Jim started a turpentine business around 1878. Ball returned to Raleigh to bring back a man named Tubb Daughtry and his family to help run the business. He gave them land to live on and permission to worship as they pleased. The turpentine business soon dwindled, and lumber became the main focus. Capt. J. B. Gunn and Capt. S. R. Weston built a sawmill two miles east of Enigma. H. F. Stewart came to work in the sawmill.

Other businesses opened in Enigma throughout the years, including a grocery, merchandise, and hardware stores. E.F. Bussey set up a merchandise store in a building owned at one time by Gunn. This building also housed the U.S. Post Office and sold coffins on its second story. It was located on the south side of the railroad. The railroad's closest depot was in Brookfield, 4 miles (6 km) away. Enigma had a doctor's office run by G.R. Parker. There have been three banks in Enigma throughout the years. Two banks were started around 1915 to 1917, and the other one was started in 1973. The People's Bank opened in 1915 and closed in 1916, and the Ambrose-Enigma Banking Company opened on June 5, 1917, and closed around 1920. The Bank of Alapaha opened a branch in Enigma on March 1, 1973, and is still in business.

There were 313 households out of which 43.5% had children under the age of 18 living with them, 55.6% were married couples living together, 13.7% had a female householder with no husband present, and 25.9% were non-families. 23.0% of all households were made up of individuals and 10.2% had someone living alone who was 65 years of age or older. The average household size was 2.78 and the average family size was 3.24.

The park holds the town's annual Fourth of July celebration, consisting of vendors, exhibits and the Miss Enigma Firecracker Pageant, each year. The town also hosts a Halloween Trick or Treat and a Christmas Parade each year.

All content from Kiddle encyclopedia articles (including the article images and facts) can be freely used under Attribution-ShareAlike license, unless stated otherwise. Cite this article:
Enigma, Georgia Facts for Kids. Kiddle Encyclopedia.