Epaminondas George Aristotle Alexander Stassinopoulos (January 17, 1921 – May 16, 2022) was a German-born American astrophysicist, writer, and Resistance member during World War II. He served as the head of the Radiation Physics Office until 2006 and Emeritus Physicist at the National Aeronautics and Space Administration (NASA)'s Goddard Space Flight Center in Greenbelt, Maryland, until 2021. He was the author of numerous papers and articles in the field of space radiation.

The younger son of Helene Costi von Paschalides and Yiorgos Stasinopoulos, Stassinopoulos was born in Bonn, Germany, in 1921 and spent his childhood in Berlin where his grandfather Johann had been knighted by Kaiser Wilhelm II for supplying the German Army with tobacco during World War I. Stassinopoulos and his older brother John were assaulted by Hitler Youth in 1935, and, after recovering in hospital, were sent to Athens in 1935 to escape Nazism. In Greece, Stassinopoulos served as a member of the Greek resistance (the EKKA resistance movement and the 2nd Bureau for Intelligence and Counterintelligence) after the Axis occupation of Greece in 1941.

After serving in the 1st Infantry Division of the Greek Army during the Greek Civil War from 1946 to 1949, and fighting in the battles of Grammos-Vitsi, Malimathi, Konitsa, and on the Albanian border; Stassinopoulos studied law, and then emigrated to the United States in 1954. 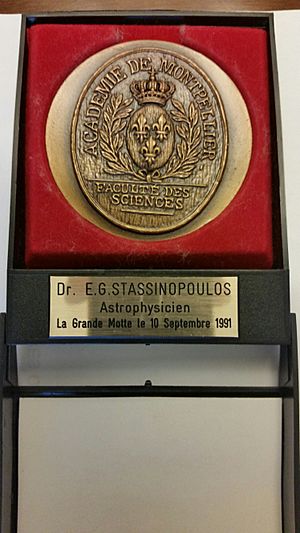 Stassinopoulos was the principal investigator in 23 original research projects for NASA and he was the author or co-author of 146 papers and articles in peer-reviewed scientific, technical, and engineering journals and books; 31 special official NASA publications; and 154 NASA Technical Study, Research, and Analysis Publications in the field of space radiation. He was a co-founder of the Radiation Effects on Components and Systems (RADECS) organization in 1989 at the University of Montpellier 2, France. He served as the Chair of a NASA Headquarters-established "Charged Particle Radiation Panel" for the development of NASA Engineering Standards for STS missions and as Chair of the US Government Consortium (NASA-NSA-NRL-USASDC) for the design and implementation of a fully automated "Irradiation Test and Research Facility" at the Department of Energy's Brookhaven National Laboratory.

Stassinopoulos micro-miniaturized two prototype space-qualified and pedigreed radiation monitors/dosimeters/spectrometers into a single pill-box sized hybrid instrument, a Pulse Height Analyzer (PHA) called the Miniature High-LET Radiation Spectrometer, weighing less than 90 grams, and was awarded a US Patent (No. 7465926 B2) on December 16, 2008 for his "Device system and method for a miniaturized radiation spectrometer." The instrument has been used for flight measurements on commercial jets, the Concorde, and the STS-95 Host Mission. Stassinopoulos' PHA instrument is on the NASA DSCOVR satellite which was launched on February 11, 2015.

After 45 years of service to NASA, Stassinopoulos retired to Emeritus status and continued to study and analyze space radiation data from the PHA. At 95 years of age, he authored a NASA Technical Publication (STI#25740 TN28435-Stass-2015) with fellow NASA scientists MA Xapsos and CA Stauffer, "Forty-Year 'Drift' and Change of the South Atlantic Anomaly (SAA)", making him one of the oldest publishing research scientists and authors in NASA's history.

Stassinopoulos married Eftichia "Effie" Pappaioannou, a philologist and archaeologist, on 16 July 1950. They had one daughter and three grandchildren. Effie died in 2013. Stassinopoulos turned 100 in January 2021, and died in Los Angeles on May 16, 2022, at the age of 101.

During his career, Stassinopoulos has received numerous awards, including the IEEE Radiation Effects Award (2000); the APOLLO-XI Achievement Award; a Faculte des Sciences medal from the Academie de Montpellier, France; the NASA Exceptional Service Medal in 1992, and the GSFC "Award of Merit" in 1999.

All content from Kiddle encyclopedia articles (including the article images and facts) can be freely used under Attribution-ShareAlike license, unless stated otherwise. Cite this article:
Epaminondas Stassinopoulos Facts for Kids. Kiddle Encyclopedia.