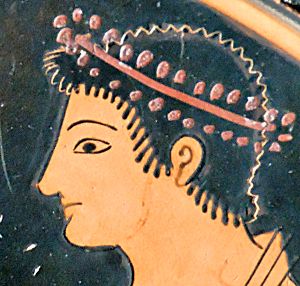 Male head by Epiktetos, detail from a plate scene, about 520/10 BC. Louvre

Epiktetos was an ancient Greek potter and vase painter. His name means "newly acquired". He may have been a slave, as were most potters and painters in ancient Greece. He worked mostly with cups and plates between 520 and 490 BC in the red-figure style. He signed more than half his works. He was an expert with the tondo—the circular picture at the bottom of a cup. He painted mostly everyday scenes rather than mythological ones. His end is unknown.

All content from Kiddle encyclopedia articles (including the article images and facts) can be freely used under Attribution-ShareAlike license, unless stated otherwise. Cite this article:
Epiktetos Facts for Kids. Kiddle Encyclopedia.