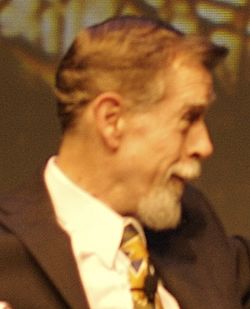 Eric McLuhan (19 January 1942 – 18 May 2018) was a Canadian communications theorist, writer and media ecologist. He was one of two sons of Marshall McLuhan.

Marshall and Eric McLuhan co-authored the books Laws of Media: The New Science (1990), Media and Formal Cause (2011), and Theories of Communication (2011). Many people thought McLuhan wrote as a ghostwriter, meaning he wrote books under his father's name.

All content from Kiddle encyclopedia articles (including the article images and facts) can be freely used under Attribution-ShareAlike license, unless stated otherwise. Cite this article:
Eric McLuhan Facts for Kids. Kiddle Encyclopedia.