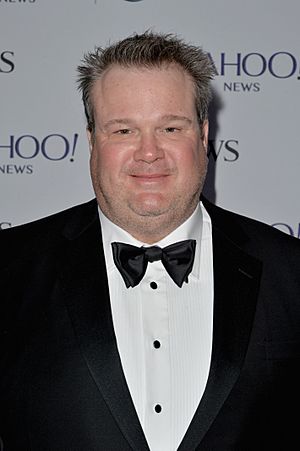 Eric Allen Stonestreet (born September 9, 1971) is an American actor and comedian. He is best known for his role as Cameron Tucker in the ABC mockumentary sitcom Modern Family (since 2009). The role has earned him two Emmy Awards for Outstanding Supporting Actor in a Comedy Series. He first became known for his role as Ronnie Litre in the CBS crime-drama CSI: Crime Scene Investigation. He has also appeared in the movies Bad Teacher (2011), Identity Thief (2013) and The Secret Life of Pets (2016).

Stonestreet was born in Kansas City, Kansas. Although known for his role as Cameron Tucker, a gay character, Stonestreet is heterosexual. He has jokingly called himself "openly straight".

All content from Kiddle encyclopedia articles (including the article images and facts) can be freely used under Attribution-ShareAlike license, unless stated otherwise. Cite this article:
Eric Stonestreet Facts for Kids. Kiddle Encyclopedia.