Erie is a ghost town located in present-day Hale County, Alabama, United States. This was formerly the county seat of a larger Greene County, but the seat was moved to Eutaw in 1838 for the benefits of a more central location in a developing frontier area.

Erie declined without the benefit of county government business. When Hale County was organized in 1867, after the Civil War, Erie was within its boundaries. It was effectively abandoned long before the last house burned down in 1933

Located at the "Erie Bend" on the east bank of the Black Warrior River, the former settlement is approximately 11 mi (18 km) east of Greensboro. 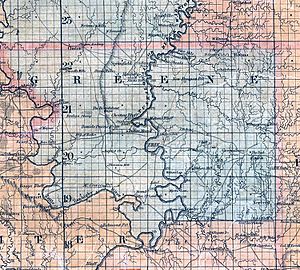 Erie was incorporated in 1820, and was a thriving town with stores, a hotel, a jail, and a population of approximately 1,500 who "dwelt in pomp and circumstances with all the bickerings and intrique (sic), the ambitions, love and hate that surrounds a prosperous town".

Erie became a shipping point for cotton headed to Mobile, and the hauling of cotton by wagon gave employment to a number of professional teamsters.

Several factors led to a decision to move the county seat to Eutaw in 1838. Erie had "little and bad water and a muddy location", and was not centrally located. As well, during the late 1830s, Yellow fever spread through Erie, and the settlement experienced flooding.

No longer the county seat, Erie was soon abandoned, with the last remaining home destroyed by fire in 1933.

The former settlement is now located on private property, and a few stones and bricks can be found there. The Erie Cemetery is located a short distance east.

All content from Kiddle encyclopedia articles (including the article images and facts) can be freely used under Attribution-ShareAlike license, unless stated otherwise. Cite this article:
Erie, Alabama Facts for Kids. Kiddle Encyclopedia.