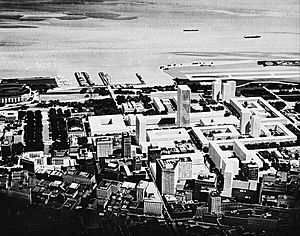 The tower was the first building erected as part of the Erieview urban renewal project initiated during the administration of Mayor Anthony J. Celebrezze in late 1960. The project was conceived as a 163-acre (66 hectare) mixed-use urban renewal area spanning from East 6th to East 17th Streets between Chester Avenue and Lake Erie. Architect I. M. Pei authored a master plan which featured groups of low-rise buildings contrasted with taller towers. Erieview Tower was to serve as the hub of the project and was to feature a plaza and reflecting pool in the area stretching from the tower west to East 9th Street.

The tower, with its underground 450 car parking garage, was completed in 1964 and although the full renewal plan was not fully implemented, significant progress was made over the course of the following twenty-five years. Much of the area was cleared for redevelopment and a number of other buildings were constructed A large amount of land was relegated to surface parking and, for a time into the late 1970s, the area became a somewhat cold and foreboding place to be with the East 9th Street corridor a limit to downtown's growth.

During the mayoral administration of George Voinovich in the early 1980s, several new structures were built flanking the tower along East 9th Street. In 1987, The Galleria at Erieview, a two-level shopping mall was built on the former Plaza by the Richard E. Jacobs Group. The structure stretches from the tower's lobby to its arched entrance at East 9th Street. From 1964 until it closed in 1995, the tower's 38th floor was home to the Stouffer's Top of the Town restaurant which offered diners a view of Cleveland's skyline.

The tower was listed on the National Register of Historic Places in 2017.

All content from Kiddle encyclopedia articles (including the article images and facts) can be freely used under Attribution-ShareAlike license, unless stated otherwise. Cite this article:
Erieview Tower Facts for Kids. Kiddle Encyclopedia.