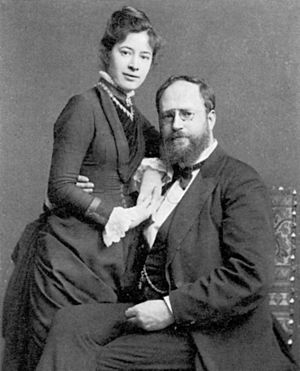 Ernst Herter and his wife Elisabeth, about 1885

Ernst Gustav Herter (born 14 May 1846 in Berlin, Germany – died 19 December 1917 in Berlin) was a famous German sculptor who worked in Berlin. He specialized in creating statues of mythological figures. Among his most famous works is Sterbender Achill (Dying Achilles), created in Berlin in 1884. The statue was acquired by the Empress of Austria and became the centerpiece at her palace Achilleion in Corfu, Greece.

The second original sculpture of Dying Achilles by Ernst Herter is in Poland in Elbląg at Łączności street opposite the City Hall. Achilles is a gift from the German Ministry of Culture and Arts. 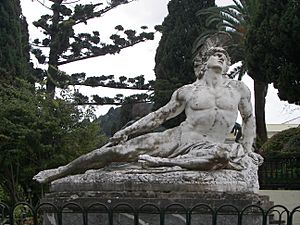 On 8 July 1899, Herter was present in New York when his Heinrich Heine memorial sculpture, known as the Lorelei Fountain, was unveiled in the Bronx, New York City. The Lorelei Fountain was originally intended for Heine's city of birth, Düsseldorf, to mark the centenary of his birth. This project was squelched due to the antisemitic and nationalistic sentiment that pervaded the German Reich at that time.

Herter studied at the Academy of Arts in Berlin and later also as apprentice of Ferdinand August Fischer, Gustav Blaeser and Albert Wolff. In 1869 he created his own studio. In 1875, he made a study trip to Italy. Professor Herter was a member of the Prussian Academy of Arts.

All content from Kiddle encyclopedia articles (including the article images and facts) can be freely used under Attribution-ShareAlike license, unless stated otherwise. Cite this article:
Ernst Herter Facts for Kids. Kiddle Encyclopedia.