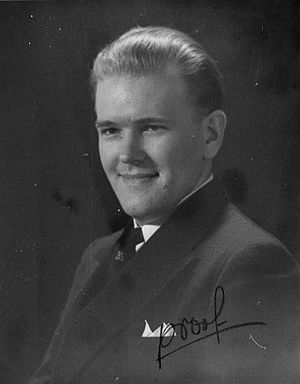 When the Soviet Union occupied Estonia in 1940 and again in 1944, the United States and other democratic nations invoked the Stimson Doctrine, did not recognize the legality of Soviet annexation of Estonia, and continued to recognize the diplomatic representatives of the Republic of Estonia. In 1965, when his predecessor, Johannes Kaiv, died, Jaakson became the consul in charge of the legation. Thus, he was the chief diplomatic representative of Estonia in the United States until Estonia regained independence in 1991. Throughout much of the 1980s, Jaakson, as the longest-serving foreign diplomatic representative to the United States, held the position of "unofficial" Dean of the Diplomatic Corps. During the long years of the Soviet occupation when the Baltic states' representatives in the West were often the object of curiosity or humorous dismissal, Jaakson commanded near-universal respect, and he did so not peremptorily but by his personal authority.

In 1991, Jaakson was appointed Estonia's ambassador to the United States and Estonia's permanent representative to the United Nations. From 1993, Jaakson continued his work as the Estonian consul general in New York.

In 1995, Ernst Jaakson's autobiographical book Eestile (For Estonia) was published, which deals not only with his life, but also gives a very good overview of the diplomatic developments which took place over the years. He died in New York in 1998, at the age of 93. He worked in the Estonian Foreign Service for 79 years and served as a diplomat for 69 years.

All content from Kiddle encyclopedia articles (including the article images and facts) can be freely used under Attribution-ShareAlike license, unless stated otherwise. Cite this article:
Ernst Jaakson Facts for Kids. Kiddle Encyclopedia.