The rural district Erzgebirgskreis is a Landkreis (district) in Saxony, Germany. It was founded on 1 August 2008. With a population of about 372,000 inhabitants, it is the most populated rural district in Saxony.

The Kreistag was elected on 8 June 2008. The current chief administrative officer of the erzgebirgskreis is Frank Vogel. 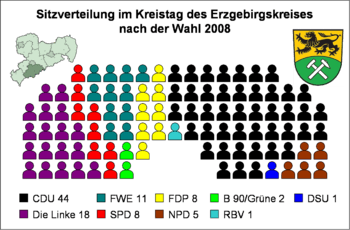 The seating of the Kreistag of the Erzgebirgskreis after the election from June, 8 2008.

All content from Kiddle encyclopedia articles (including the article images and facts) can be freely used under Attribution-ShareAlike license, unless stated otherwise. Cite this article:
Erzgebirgskreis Facts for Kids. Kiddle Encyclopedia.