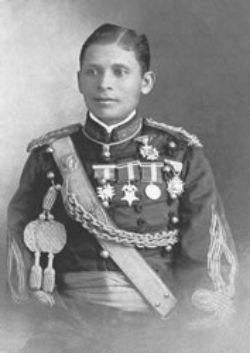 Esteban Huertas López (1876-1943) was a Colombian military leader from Panama.

He was born in Boyacá, Colombia. When he was 8 years old he ran away from home and he joined the army. He won many medals and in 1902 he became general. In 1900 he lost an arm when he fired a cannon. In 1903 he was one of the people who made Panama independent. A year later president Manuel Amador forced Huertas to retire because he was afraid Huertas wanted to become dictator. Huertas died in Panama City in 1943.

All content from Kiddle encyclopedia articles (including the article images and facts) can be freely used under Attribution-ShareAlike license, unless stated otherwise. Cite this article:
Esteban Huertas Facts for Kids. Kiddle Encyclopedia.