Estelline is a town located in Hall County, Texas, United States. The population in 2010 was 145. The population was estimated at 141 in 2013. In 2012, Estelline was ranked #1 in a National Motorists Association listing of its "Worst Speed Trap Cities" in North America (with a population of less than 50,000). Estelline often refers to itself as the "Town of Estelline", with a "Town Hall" and a "Town Council", rather than the customary "city" label. However, under Texas law, all incorporated municipalities are considered to be cities.

Estelline was established in 1892 by the brothers Elam and Math Wright. It was on the Fort Worth and Denver City Railway and was named for Estelle de Shields, daughter of an early settler. The area was originally part of the Diamond Tail Ranch. The Mill Iron range lay nearby, and after 1896 the Continental Land and Cattle Company moved its headquarters to a nearby bluff overlooking the Red River. A post office was opened in May 1892, and by 1894 Estelline had two hotels, a Methodist church, a cotton gin, a livery stable, and a one-room schoolhouse. Tom Macy opened the first store, and soon afterward T. R. Garrott established the Estelline Supply Company. In 1894 Math Wright obtained a depot and sidetrack for his town, and throughout the remainder of the decade Estelline was an important shipping point on the Fort Worth and Denver City line. Cattle from nearby Silverton and Paducah were driven there for shipment. In 1896 the Mill Iron Ranch bought the Estelline Supply Company and opened a large general merchandise store and lumberyard with R. L. Biggerstaff as manager. Two years later Biggerstaff established a private bank, which became the Estelline State Bank in 1905. The town had two newspapers, the Estelline Star (1894–96) and the Estelline News (1907–10). A two-story school was built in 1909. In 1912 the citizens of Estelline elected to incorporate with a mayor, a city marshal, and five aldermen. By then the town had attained a population of over 1,000.

The 1920s saw the erection of permanent brick school facilities, the emergence of a champion basketball team, and the organization of a town band conducted by Paul James. In 1927 the railroad began construction of a branch line out of Estelline to Plainview in Hale County. However, the Great Depression led to the closing of the bank and a decline in the population to 603 by 1940. That year two fires destroyed several businesses. Subsequent improvements in highway transportation led to an overall decline in Estelline's importance as a railroad junction town. The number of businesses dropped from fifteen in 1947 to four by 1980, when the population was 258. The town was still incorporated, and the post office remained open.

In 1983, Estelline citizens voted to allow the sale of alcohol beverages. Estelline is the only seller of alcohol beverages within 'dry' Hall County. Estelline has a reputation for being a prominent Texas speed trap and relies on speeders to pay its bills. The Estelline Independent School District was declared dormant in 1987 and students were sent to Memphis schools. Estelline was home to 194 residents in 1990, 168 in 2000 and 145 in 2010. In 2012, the Town Hall was mysteriously gutted by fire. Texas Rangers and the State Fire Marshal have both described the incident as arson. A highly publicized 2013 civil rights case revealed that 89 percent of Estellines 2012 gross revenue came from asset forfeiture and traffic fine revenue.

In September 2013, a federal suit was filed by Laura Dutton, alleging that the cities of Estelline and Memphis, former Officer Jayson Fry and Memphis Police Chief Chris Jolly violated her Fourth Amendment rights against illegal search and seizure when she was arrested Nov. 28, 2012, in Estelline on a felony money laundering charge, seizing more than $29,000 from her pickup and keeping $1,400 of her cash. The city maintained no written records of past searches or seizures, yet traffic fines and forfeitures made up more than 89 percent of its gross revenues in fiscal year 2012. The cities and the officers denied her claims, but in July 2014, the city of Estelline and City of Memphis authorities settled with Dutton for $77,500. 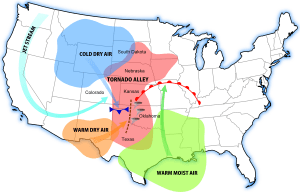 A diagram of tornado alley based on 1 tornado or more per decade. Rough location (red), and its contributing weather systems

According to the Köppen Climate Classification system, Estelline has a semi-arid climate, abbreviated "BSk" on climate maps. 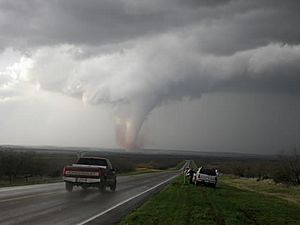 Estelline, Texas is often referred to as being located at the core of Tornado Alley. Over the years, the location(s) of Tornado Alley have not been clearly defined. No official definition of 'tornado alley' or the geographical area of tornado alley has ever been designated by the National Weather Service Thus, differences of location are the result of the different criteria used.

According to the National Severe Storms Laboratory FAQ, "Tornado Alley" is a term used by the media as a reference to areas that have higher numbers of tornadoes. A study of 1921–1995 tornadoes concluded almost one-fourth of all significant tornadoes occur in this area.

There were 54 households out of which 24.1% had children under the age of 18 living with them, 46.3% were married couples living together, 5.6% had a female householder with no husband present, and 44.4% were non-families. 42.6% of all households were made up of individuals and 33.3% had someone living alone who was 65 years of age or older. The average household size was 2.69 and the average family size was 4.00. 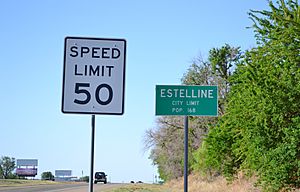 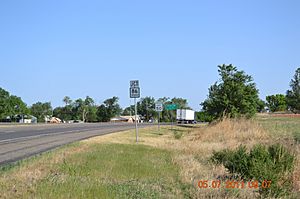 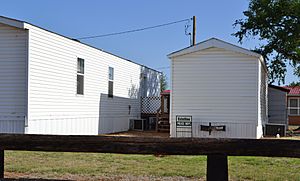 Estelline has a reputation for being a prominent Texas speed trap. In 2012, Estelline was ranked #1 in a National Motorists Association listing of its "Worst Speed Trap Cities" in North America (with a population of less than 50,000). Estelline has a one-person police force whose main purpose is to wait for speeders. A 2013 civil rights case revealed that 89 percent of Estelline's 2012 gross revenue came from asset forfeiture. Furthermore, Estelline relies on speeders to pay its bills. From 2000 through 2009, Estelline had the second highest traffic fine revenue per citizen in Texas, more than 300% the per citizen revenue of third place Domino. 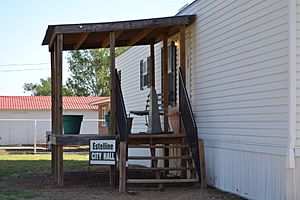 State officials audited Estelline in 1999 and 2003, finding in the earlier instance that the town owed the state $15,025 in excess traffic fines.

A 2013 Civil rights case revealed that the city of Estelline is paying off a substantial debt for unpaid traffic fine revenues that it was supposed to pay into the state’s coffers. The city owed the state $600,000 for the state’s share of traffic ticket income in 2006 and 2007, but reduced its back debt to about $300,000 as of March 2014, and is paying roughly $10,000 a month to pay it off. 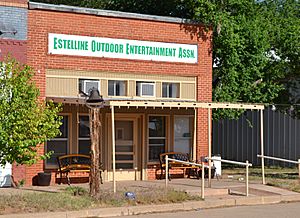 The Estelline Outdoor Entertainment Association is a non-profit organization that exists to meet the needs of the local community, volunteers, and participants. The website: http://www.estellineoutdoorentertainment.com provides information about all fund raising events and functions to all those interested in participating. According to the website, the aim is to increase community awareness and aid those less fortunate, to provide community entertainment, involvement and to establish work programs for those willing to work.

All content from Kiddle encyclopedia articles (including the article images and facts) can be freely used under Attribution-ShareAlike license, unless stated otherwise. Cite this article:
Estelline, Texas Facts for Kids. Kiddle Encyclopedia.