Estrella is a mixed-use master-planned community located in Goodyear, Arizona, in the United States. Encompassing roughly 20,000 acres, the lakeside community is nestled in the foothills of the Sierra Estrella Mountains, in the Sonoran Desert Valley. Located approximately 17 miles west of Phoenix off the I-10 and Estrella Parkway, the community offers easy access to the Greater Metro-Phoenix area. Currently, Estrella is home to more than 40,000 residents ranging from young couples to retirees. The community hosts regular family-friendly events, provides residents with a variety of amenities and its design includes an abundance of parks, trails and open space to support a healthy, outdoor lifestyle. Estrella currently comprises three distinct communities – Mountain Ranch, Montecito and the gated, 55-Plus CantaMia.

The community was recognized in Arizona Foothills Magazine's "Best of Our Valley 2015" list as the best Master-Plan Community for Children.

In 1984 the Estrella property, a federal land reserve, was released to private ownership by the government. In 1985 Charles Keating of the American Continental Corporation purchased the land to create a master-planned community. In 1986, construction began on the North and South lakes, a combined total of 72 acres, and in 1988 the Estrella Master-Planned Community held its official grand opening. The Golf Club of Estrella opened its 18 Nicklaus Design holes in 1999, offering challenging play to golfers of all levels. 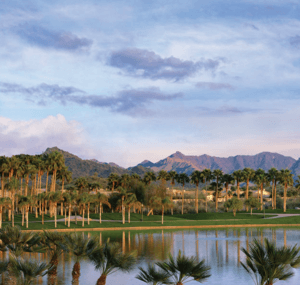 In 2005, planned community developer Newland Communities acquired Estrella and focused on the strategic growth of the community. Estrella’s second community, Montecito, opened in 2007 and its 55-Plus CantaMia community officially opened in 2010. That same year, Mountain Ranch Marketplace welcomed its anchor tenant, Safeway. Medical services were added to the community in 2013 with the addition of Banner Health Medical Center opening in Mountain Ranch Medical Commons.

Estrella residents have access to a number of amenities within the community: 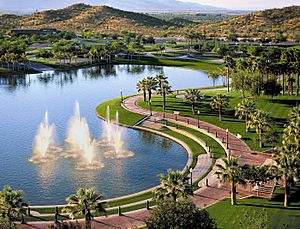 A View of North Lake

Starpointe Residents Club Located on the shore of North Lake, the 24,400 square-foot facility is home to amenities catering to all ages. Some of the most popular features are the StarSplash Water Park, heated lap pool, library, The Branches Café and state-of-the-art fitness center. Starpointe also hosts many of the community’s social clubs and events.

Golf Club of Estrella Managed by Troon Golf and open to the public, the Golf Club of Estrella has been recognized by Golfweek as one of the 2014 "Best Courses You Can Play" and previously ranked in the top 20 on the magazine’s list of “America's Best Courses, State by State.” The 7,102 yard, par 72 Nicklaus Design course offers challenging play for golfers of all abilities. The Golf Club is also home to the Players Grill and Patio Restaurant. 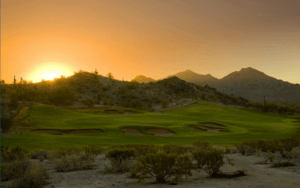 The Golf Club of Estrella

Parks & trails The Estrella community is built around natural desert surroundings and offers residents more than 20 miles of paths and trails as well as 500 acres of parks and open space to support an active, outdoor lifestyle.

Star Tower Located at Estrella’s entrance, Star Tower is a 50-foot spiral shaped observatory designed to resemble the Milky Way. The feature is a tribute to the area’s many historical stargazing cultures.

The Estrella Museum The Information Center is also home to The Estrella Museum which showcases the past, present and future of the community, City of Goodyear and the surrounding Sonoran Desert. One of its main features is a four panel history timeline depicting life from the early days with the arrival of the Hohokam Native Americans, to present day and beyond. Several unique artifacts from the area are also on display. The Estrella Museum also serves as an incubator for the Sonoran Desert Valley Historical Society as an extension of the existing Three Rivers Historical Society and is free and open daily to the public during Information Center hours of operation.

Opened in 1954, Estrella Mountain Regional Park was the first regional park in the Maricopa County Park System and comprises 19,840 acres of desert and mountain terrain.

The park offers a variety of hiking, biking and horse trails, as well as great bird and wildlife watching opportunities as small ponds and vegetation in the bottom of the Gila River attract a variety of species. The park’s Nature Center offers live animal displays and “Critter Feeding” events. Guests can explore the park on their own or on one of the many ranger-guided hikes and tours.

Goodyear Ballpark is the current spring training home of the Cleveland Indians and the Cincinnati Reds. The stadium opened to the public with a grand opening ceremony on February 21, 2009 and held its first Cactus League spring training baseball game on February 25, 2009. In the off-season, the ballpark hosts several community events such as the City of Goodyear's Star Spangled 4th, Fall Festival, and Home Plate for the Holidays.

All content from Kiddle encyclopedia articles (including the article images and facts) can be freely used under Attribution-ShareAlike license, unless stated otherwise. Cite this article:
Estrella, Goodyear Facts for Kids. Kiddle Encyclopedia.