Ethmostigmus rubripes, the giant centipede, is the largest Australian centipede. Its size tends to vary in accordance with locality, with the head and body length ranging from 7.5 to over 16 cm (6 1⁄4 in), with some individuals exceeding 20 cm. Coloration and patterning varies enormously between specimens from different locations, with shades of yellow and orange being perhaps the most common. Forms from arid climates are often a pale yellow in colour, while those from rainforest habitats typically exhibit dark green or blue coloration. Body proportion also varies with habitat; arid forms are typically very heavily built with proportionally short legs, while their tropical counterparts tend to have longer legs and a lighter build. Ethmostigmus rubripes also has three subspecies, with substantial variation within each.

It is found in both dry and moist habitats, ranging from tropical rainforest to desert, usually in sheltered places such as under logs, leaf litter and bark, and beneath rocks. It is a solitary, terrestrial and nocturnal predator. It is widely distributed in Australia, where it exhibits the greatest variation, but is also found in the Solomon Islands, New Guinea, Indonesia, and parts of Southeast Asia.

E. rubripes is a voracious eater. Insects, snails, worms and even Arachnids are fair game for most individuals. Larger specimens are more than capable of subduing small vertebrates, which are overpowered by a combination of brute strength and the centipede's powerful venom. They have also been observed scavenging on roadkill.

The eggs are laid in clusters of roughly thirty, though sometimes fewer than ten or greater than forty, and the mother guards the eggs and hatchlings until after their second moult. The eggs usually take well over a month to develop, and the babies remain with the mother for a few weeks after that.

The giant centipede has modified legs called forcipules attached to the first body segment, which curve around its head and can deliver venom into its prey. The venom is toxic to both mammals and insects, but does not appear to be strong enough to kill large animals quickly. It can cause severe pain in humans which can last for several days but which can be relieved somewhat by the application of icepacks. Some people report "intense pain", while others claim it is no worse than a wasp sting. There has been at least one reported death from the related centipede species Scolopendra subspinipes in which a young girl was bitten and died. 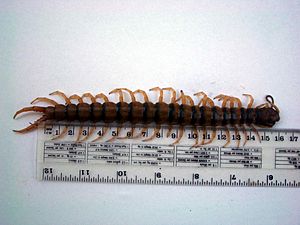 A large specimen of Ethmostigmus rubripes

All content from Kiddle encyclopedia articles (including the article images and facts) can be freely used under Attribution-ShareAlike license, unless stated otherwise. Cite this article:
Ethmostigmus rubripes Facts for Kids. Kiddle Encyclopedia.