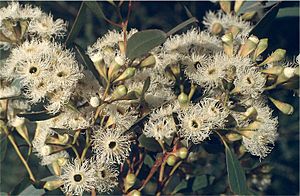 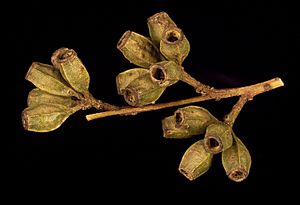 Four subspecies have been formally described and accepted by the Australian Plant Census:

Subspecies calycogona is the most widespread of the subspecies and occurs in all these states, especially in Western Australia where it grows in the southern and central wheatbelt, Great Southern and southern Goldfields-Esperance regions of Western Australia extending eastwards almost to Balladonia. It is found on the Eyre Peninsula and south-eastern Mount Lofty Ranges of South Australia, the Big Desert area of Victoria and the Koraleigh area in the far south-west of New South Wales.

Subspecies trachybasis is found from the eastern side of Spencer Gulf in South Australia, westwards to Boort and Kerang and north from Edenhope in Victoria. Subspecies spaffordii is restricted to southern parts of the Eyre Peninsula in South Australia and subspecies miracula in an area to the south of Southern Cross in Western Australia.

E. calycogona is cultivated as an ornamental or shade tree that is suitable for coastal or inland areas. The tree is tolerant of drought, lime and moderate frost and is bird and insect attracting.

All content from Kiddle encyclopedia articles (including the article images and facts) can be freely used under Attribution-ShareAlike license, unless stated otherwise. Cite this article:
Eucalyptus calycogona Facts for Kids. Kiddle Encyclopedia.