Eucalyptus celastroides, commonly known by the Noongar name of mirret, is a species of eucalypt that is endemic to the south-west of Western Australia. It is a mallee, rarely a tree, and has rough bark on about half of the lower half of its tunk, smooth above, narrow lance-shaped adult leaves, flower buds in groups of seven or nine, white flowers and urn-shaped fruit. 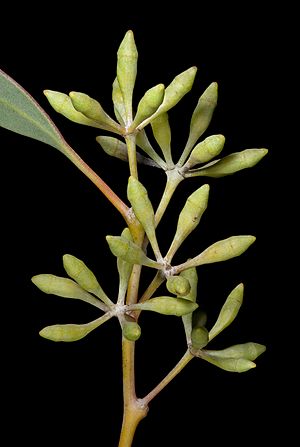 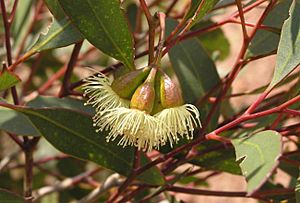 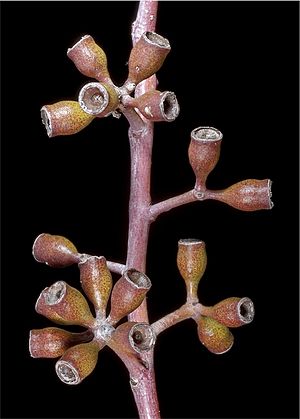 Eucalyptus celastroides was first formally described by Nikolai Turczaninow in 1852 from a specimen collected by James Drummond. The description was published in the journal Bulletin de la Classe Physico-Mathématique de l'Académie Impériale des Sciences de Saint-Pétersbourg. The specific epithet (celastroides) is a reference to the genus Celastrus. The ending -oides is a Latin suffix meaning "likeness".

In 1986, Ian Brooker described two subspecies in the journal Nuytsia and the names have been accepted by the Australian Plant Census:

Mirret is often found on flat or undulating country where it grows in sandy or clayey soils. Subspecies celastroides has a more easterly distribution than subspecies virella. The former occurs in the goldfields between Kellerberrin and Norseman, extending almost to Balladonia. Subspecies virella occurs mainly in the wheatbelt.

All content from Kiddle encyclopedia articles (including the article images and facts) can be freely used under Attribution-ShareAlike license, unless stated otherwise. Cite this article:
Eucalyptus celastroides Facts for Kids. Kiddle Encyclopedia.