Eucalyptus cordata, commonly known as the heart-leaved silver gum is a shrub to medium-sized tree that is endemic to Tasmania. It has smooth bark throughout, mostly only juvenile, more or less heart-shaped, glaucous leaves, glaucous flower buds arranged in groups of three, white flowers and cylindrical or hemispherical fruit. 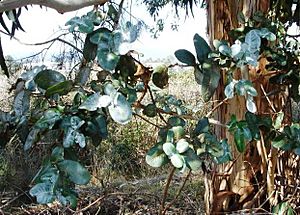 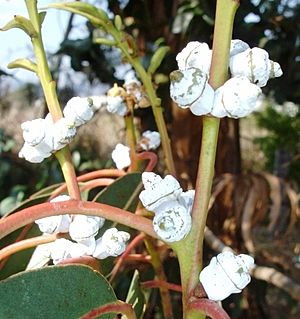 Eucalyptus cordata was first formally described in 1806 by Jacques Labillardière who published the description in Novae Hollandiae Plantarum Specimen. The specific epithet (cordata) is a Latin word meaning "heart-shaped" referring to the leaves.

In 2008, Dean Nicolle, Brad Potts and Gay McKinnon described two subspecies and the names have been accepted by the Australian Plant Census:

Heart-leaved silver gum has a restricted distribution in the south-east of Tasmania, growing at intermediate altitudes such as on the foothills of Mount Wellington, on the Snug Plains and around Port Arthur and Moogara. The tree makes an attractive ornamental with its large, glaucous juvenile leaves, which often persist in the crown. Subspecies cordata mainly occurs south from Triabunna and is found on Bruny and Maria Islands. Subspecies quadrangulosa is centred on the Wellington Range but is most prolific on the Snug Plains.

All content from Kiddle encyclopedia articles (including the article images and facts) can be freely used under Attribution-ShareAlike license, unless stated otherwise. Cite this article:
Eucalyptus cordata Facts for Kids. Kiddle Encyclopedia.