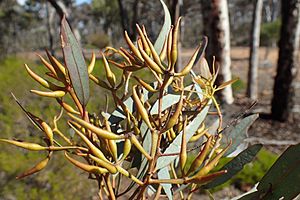 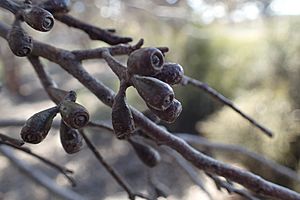 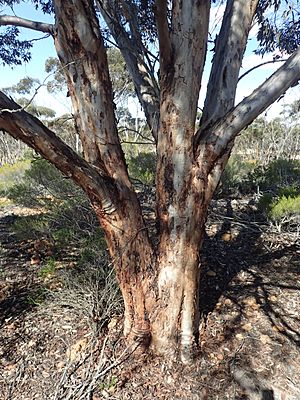 Eucalyptus densa is a species of mallee or mallet that is endemic to Western Australia. It has smooth greyish bark that is shed in curly strips, linear to narrow lance-shaped adult leaves, long, spindle-shaped flower buds in groups of seven or nine, pale yellow or lemon-coloured flowers and conical, cylindrical or barrel-shaped fruit.

Eucalyptus densa was first formally described in 1991 by the botanists Ian Brooker and Stephen Hopper and the description was published in the journal Nuytsia. The specific epithet (densa) is a Latin word meaning "thick", "close" or "compact", referring to crown of this species.

Brooker and Hopper also described two subspecies and the names have been accepted by the Australian Plant Census:

The subspecies name improcera is a Latin word meaning "short" or "undersized", referring to its stature compared to subspecies densa.

This eucalypt is found on ridges, flats and drainage line areas of the southern Wheatbelt and Goldfields-Esperance regions of Western Australia where it grows in clay, loam, sandy or lateritic soils. Subspecies densa is found between Ongerup, Ravensthorpe and Hyden and subspecies improcera in the Ravensthorpe and Jerramungup areas.

Both subspecies of E. densa are classified as "not threatened" by the Western Australian Government Department of Parks and Wildlife.

All content from Kiddle encyclopedia articles (including the article images and facts) can be freely used under Attribution-ShareAlike license, unless stated otherwise. Cite this article:
Eucalyptus densa Facts for Kids. Kiddle Encyclopedia.