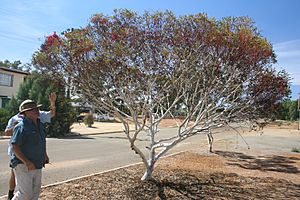 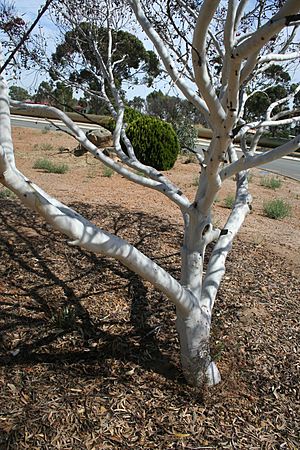 Eucalyptus erythronema, commonly known as the red-flowered mallee, is a species of mallee or tree and is endemic to Western Australia. It has smooth, dark pink to red bark that is shed to reveal whitish bark, and has lance-shaped adult leaves, pendulous flower buds mostly arranged in groups of three, red or yellow flowers and conical fruit.

In 2012, Dean Nicolle and Malcolm French described two subspecies and the names have been accepted by the Australian Plant Census:

Subspecies erythronema has waxy branchlets and usually red flowers; subspecies inornata has branchlets that are not waxy, and has pale creamy yellow flowers.

The specific epithet (erythronema) is derived from the ancient Greek words erythros meaning "red" and nema meaning "a thread", referring to the red stamens.

Red-flowered mallee is found in the southern Wheatbelt region of Western Australia where it grows in shrubland and open woodland in sandy-clay soils with lateritic gravel. It is found from near Wongan Hills to near Corrigin and as far east as Southern Cross.

It has a moderate growth rate and grows well in full sun. It is sold commercially in seed form or as tube stock and is used for ornamental plantings, honey production, products rich in tannin and as a screening plant. It germinates easily and is drought resistant.

All content from Kiddle encyclopedia articles (including the article images and facts) can be freely used under Attribution-ShareAlike license, unless stated otherwise. Cite this article:
Eucalyptus erythronema Facts for Kids. Kiddle Encyclopedia.