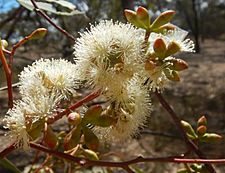 Eucalyptus microcarpa, commonly known as grey box, is a species of tree that is endemic to southeastern continental Australia. It has rough, fibrous or flaky bark on the trunk, smooth whitish bark above, lance-shaped adult leaves, flower buds in groups of between seven and eleven, white flowers and oval, cylindrical or urn-shaped fruit.

Grey box was first formally described in 1902 by Joseph Maiden who gave it the name Eucalyptus hemiphloia var. microcarpa in the Transactions, proceedings and report, Royal Society of South Australia. (Eucalyptus hemiphloia had previously been described by Ferdinand von Mueller, but that name is now accepted as a synonym of Eucalyptus moluccana.) In 1923, Maiden raised the variety to species status as E. microcarpa.

Eucalyptus microcarpa occurs in Queensland, New South Wales, Victoria and South Australiais widespread and locally abundant inland from the Great Dividing Range in New South Wales. In Victoria it is found from the Wimmera east to south of Benalla and also occurs in Queensland. In South Australia, its distribution includes the Mount Lofty Ranges and Heywood Park near Adelaide. It is associated with grassy woodland and loamy soils.

This eucalypt is a component of the grey box (E. microcarpa) grassy woodlands and derived native grasslands of south- eastern Australia that is listed as "endangered" under the Australian Government Environment Protection and Biodiversity Conservation Act 1999.

All content from Kiddle encyclopedia articles (including the article images and facts) can be freely used under Attribution-ShareAlike license, unless stated otherwise. Cite this article:
Eucalyptus microcarpa Facts for Kids. Kiddle Encyclopedia.