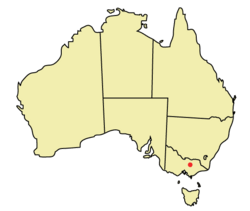 Major Thomas Mitchell went through this area on his way back to Sydney in 1836. One of the men with him, a convict named James Taylor, was drowned while trying to cross the Broken River. After Mitchell many farmers arrived with sheep to make new farms. The Reverend Joseph Docker (1793 - 1865) started a farm called "Benalta" in 1838 but later settled on the run Bontherambo, near Wangaratta. The name came from the Taungurung Australian aboriginal word meaning "musk duck". The name later changed to Benalla.

Seven men, working for farmers George and William Faithfull, were killed by the aborigines at Winding Swamp on April 11 1838. The police under Captain Lonsdale killed many Taungurung people as punishment. Their ears were cut off and taken back to Melbourne as a trophy (prize).

The town of Benalla was surveyed in 1846.

The Benalla Botanical Gardens were started in 1886. They cover an area of 5.1 ha (13 acres). The gardens are well known for their collection of roses. The gardens also have three Ulmus x viminalis, an elm tree hybrid. These trees are listed on the Significant Tree Register of the National Trust. They are the only known examples of the hybrid elm in Australia.

All content from Kiddle encyclopedia articles (including the article images and facts) can be freely used under Attribution-ShareAlike license, unless stated otherwise. Cite this article:
Benalla, Victoria Facts for Kids. Kiddle Encyclopedia.