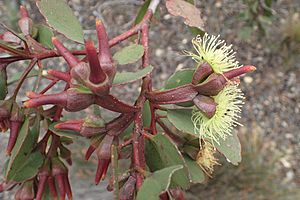 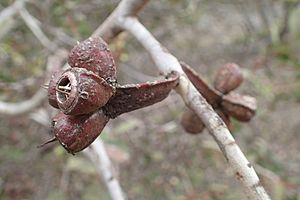 Eucalyptus platypus, also known as moort or maalok, is a species of mallee or marlock that is endemic to the southwest of Western Australia. It has smooth bark, broadly elliptical to more or less round adult leaves, flower buds in groups of nine on a broad, flattened peduncle, usually creamy white flowers and conical, down-turned fruit.

Eucalyptus platypus was first formally described in 1851 by William Jackson Hooker in his book Icones Plantarum from material collected near King George's Sound by James Drummond. The specific epithet (platypus) is from the ancient Greek words platys (πλατύς) meaning "broad" or "flat and pous (πούς) meaning "foot", referring to the peduncle.

In 2002 Ian Brooker and Stephen Hopper described two subspecies and the names have been accepted by the Australian Plant Census:

The Noongar names for this species are maalok or moort.

Moort occurs in an area between Albany and Esperance in Western Australia. It is found on plains and hilly, rocky country in the Great Southern and Goldfields-Esperance regions of Western Australia where it grows in sandy, loam or clay soils often around laterite. It extends from coastal areas and is seen as far west as Broomehill to Ravensthorpe in the east.

The species is considered as a weed on the Eyre Peninsula where it is known to invade disturbed areas of native vegetation. The dense low-growing foliage then prevents growth of understorey species.

This fast growing species is sold commercially and is well suited to heavy soils. It is resistant to frost and drought, will tolerate water logging and smog. They are ideal for coppicing and respond well to pruning. The bushy nature of the plant make it well suited for use as a windbreak and the floriferous nature make it useful for beekeepers and honey production.

All content from Kiddle encyclopedia articles (including the article images and facts) can be freely used under Attribution-ShareAlike license, unless stated otherwise. Cite this article:
Eucalyptus platypus Facts for Kids. Kiddle Encyclopedia.