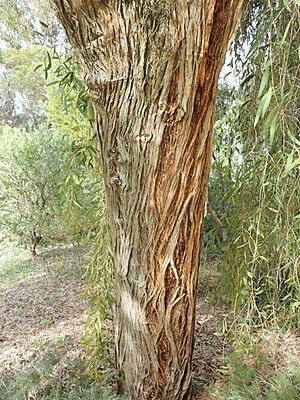 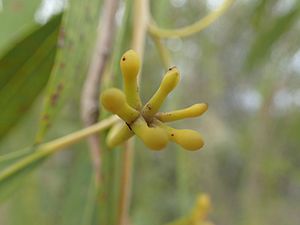 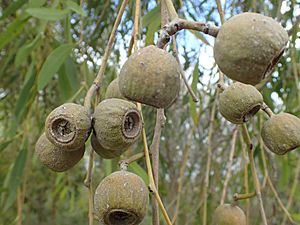 Eucalyptus todtiana, commonly known as coastal blackbutt pricklybark or dwutta, is a species of tree or a mallee that is endemic to the west coast of Western Australia. It has rough, fibrous and flaky bark on the trunk, smooth bark on the branches, lance-shaped adult leaves, flower buds in groups of between seven and eleven, white flowers and cup-shaped to hemispherical fruit.

Eucalyptus todtiana was first formally described by Ferdinand von Mueller in 1882, based on specimens collected by him from sandy ridges near the Greenough and Arrowsmith Rivers in 1877, and also specimens collected by John Forrest from near the Moore River. The description was published in the journal Southern Science Record. The specific name honours Emil Todt, a botanical artist who drew some of the plates for Mueller's Atlas of Eucalypts.

This species is part of the Eucalyptus subgenus series Diversiformae, subseries Neuropterae, a group of mallees that all have adult leaves held erect, buds with a single unscarred operculum and pyramidal seeds.

Coastal blackbutt grows in scrub and in open woodland on sandy flats and gentle slopes on the coastal plain between Perth and Dongara in the Avon Wheatbelt, Geraldton Sandplains, Jarrah Forest and Swan Coastal Plain biogeographic regions.

The slow growing, long lived species is a habitat tree for many local fauna such as nectar-feeding birds, bats, lizards and insects.

Eucalyptus todtiana is not often grown in cultivation. It grows rapidly as a sapling if planted in an open position, but as an adult it grows slowly and flowers profusely. It is both frost and drought tolerant.

Indigenous Australians used parts of the tree for medicinal purposes. The leaves as a nasal decongestant or as an antibacterial poultice by crushing the leaves. Leaves were also eaten to relieve dysentery. The gum was also used on sores as an ointment. Leaves from the tree were also commonly used for bedding.

All content from Kiddle encyclopedia articles (including the article images and facts) can be freely used under Attribution-ShareAlike license, unless stated otherwise. Cite this article:
Eucalyptus todtiana Facts for Kids. Kiddle Encyclopedia.