Evan Thomas Spiegel (born June 4, 1990) is an American businessman who is the co-founder and CEO of the American social media company Snap Inc., which he created (as Snapchat Inc.) with Bobby Murphy and Reggie Brown while they were students at Stanford University. Spiegel was the youngest billionaire in the world in 2015.

Spiegel was born in Los Angeles, California, into a family of lawyers John W. Spiegel and Melissa Ann Thomas. He grew up in Pacific Palisades, California, where he was raised Episcopalian. He was educated at the Crossroads School for Arts and Sciences in Santa Monica, and attended Stanford University.

Spiegel took design classes at the Otis College of Art and Design while still in high school and at the Art Center College of Design in Pasadena the summer before entering Stanford. He also had an unpaid internship in sales at Red Bull. While a student, he worked as a paid intern for a biomedical company, as a careers instructor in Cape Town, South Africa, and at Intuit on the TxtWeb project. Spiegel is a member of the Kappa Sigma fraternity. 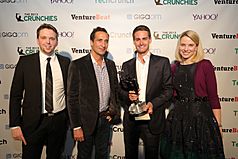 Spiegel at the 7th Annual Crunchies Awards on February 10th, 2014 in San Francisco.

In April 2011, while studying product design at Stanford, Spiegel proposed an app with ephemeral messaging as a product design class project, an idea which his classmates ridiculed. Later that year, Spiegel worked with fellow Stanford classmates Bobby Murphy and Reggie Brown to launch a prototype of this concept called "Picaboo", which they later renamed as Snapchat. The app's popularity grew significantly and in 2012, Evan left Stanford to focus on Snapchat shortly before completing his degree. By the end of 2012, Spiegel's Snapchat app had reached 1 million daily active users.

In February 2017, Spiegel and Murphy pledged to donate upwards of 13,000,000 shares of Class A common stock over the next 15–20 years to an arts, education and youth non-profit. They have created the Snap Foundation which is a non-profit organization targeted to help in these areas. Their mission is to "develop pathways to the creative economy for underrepresented youths in Los Angeles." Recently they have donated $3 million to people affected by COVID-19. In January 2017 The Wall Street Journal reported that after the predicted March 2017 IPO for Snap Inc., Murphy and Evan Spiegel would hold over "70% of the voting power" in the company, and own around 45% of the total stock.

On July 19, 2018, Spiegel revealed to "Stay Tuned", NBC News's show on Snapchat that he completed his degree requirements and graduated from Stanford in 2018. He notes that his baby, Hart Kerr Spiegel, was his motivation to complete his collegiate education so that he can inspire his son to graduate from college as well.

Spiegel began dating Australian model Miranda Kerr in 2015. They became engaged on July 20, 2016. They married in a private ceremony in Los Angeles on May 27, 2017. Just a month before Spiegel's engagement to Kerr, he purchased a 7,164 square foot, $12 million house that was previously owned by Harrison Ford. In November 2017, Kerr announced that she and Spiegel were expecting their first child. On May 7, 2018, Miranda gave birth to their son Hart Kerr Spiegel, named after Spiegel's grandfather. In March 2019, the couple announced that they are expecting their second child together, Kerr's third. In October 2019, Kerr gave birth to Myles Spiegel.

As of 2016, Spiegel was ranked at number 854 on the Forbes 400 with $4 billion in wealth. In 2017, Spiegel became one of the youngest public company CEOs at age 26 when Snap began trading in March. Spiegel is also a member of the Berggruen Institute's 21st Century Council.

In 2018, he and his son Hart received French citizenship through a clause in the naturalization laws that waives French residency requirements for applicants that contribute to the French culture or economy.

All content from Kiddle encyclopedia articles (including the article images and facts) can be freely used under Attribution-ShareAlike license, unless stated otherwise. Cite this article:
Evan Spiegel Facts for Kids. Kiddle Encyclopedia.