Everett Mall is a 673,000-square-foot (62,500 m2) indoor/outdoor shopping mall located in Everett, Washington, United States. Planned in the late 1960s, the mall began with the construction of two anchor stores, Sears in 1969 and White Front in 1971; the mall was originally built and opened in 1974. It was plagued from the start of development: construction was stalled in 1972 due to the Boeing bust, and it suffered further misfortune with one anchor store closing before the rest of the mall could open. The mall also had a low tenant rate upon opening, only rebounding after The Bon Marché (later Macy's) opened in 1977; the success led to the construction of an additional north wing to the mall anchored by the upscale Frederick & Nelson department store. In 2004, the mall underwent a massive expansion and renovation that included the addition of a 16-screen movie theater and outdoor stores along the south side. The mall's anchor stores are Regal Cinemas, LA Fitness, Burlington, Floor & Decor, Ulta Beauty, and Party City. There is one vacant anchor store that was once Sears.

Mervyn's, an anchor since 1992, closed late 2006. The store was replaced with LA Fitness and Steve & Barry's. Steve & Barry's in turn was closed in 2009 after its owners filed for Chapter 11 bankruptcy protection and was replaced by Burlington Coat Factory in 2013. Macy's closed its store in 2017 followed by Sears in early 2020.

The plan for a modern shopping mall in Everett was first formulated in the mid-1960s under the moniker "Broadway Mall". In 1968, developers Norman L. Iverson & Associates of Tacoma and Earl Cohen & Associates of Beverly Hills purchased a 60 acre lot south of downtown in the diagonal area bound by Interstate 5, US 99, and the Broadway cutoff, now known as Everett Mall Way. 10.4 acres (42,000 m2) of the property nearest to the interstate would be the focus of future mall development. The first merchant they attracted to the new site was the Sears, Roebuck and Company department store, who would leave their location of 40 years at 2701 Colby Street in downtown Everett to build the first store on the property. Robert Freidenrich, soon-to-be manager of the new store, discussed the rationale of the store's exodus to the suburbs with The Seattle Times:

The store, which opened to the public on February 12, 1969, contained 114,375 square feet (10,625.8 m2) arranged into 50 different departments. The store also contained a 14-stall automotive repair center, an outdoor garden center, a tailor shop and a 40-seat coffee shop. The Richardson Associates were the architects and engineers.

Sears was joined by another large anchor store on the property with the grand opening of the California-based discount department store chain, White Front on May 13, 1971. It was the chain's fifth store in the Puget Sound region. The Iverson and Cohen firms soon began planning for the construction of an enclosed mall to connect Sears and White Front as well as a planned third anchor store but construction was halted when massive cutbacks at Boeing threatened the economic stability of the entire region. Hackensack, New Jersey based developer, Hanson Development Company purchased the unfinished mall in July 1972 with promises to complete the project.

In late 1973 came the announcement of a new triplex theater at the mall by General Cinema Corporation of Boston, who operated theaters in Renton and the Overlake area of Redmond. It was billed as Washington's first triple-auditorium indoor theater. The Everett Mall Cinemas I, II and III opened on February 13, 1974 with a seating capacity of 1,300. The opening attractions were The Sting, Serpico and American Graffiti. 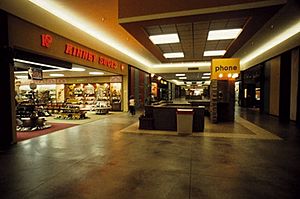 The mall's interior in June 1975, with Sears in the background.

Construction of the mall continued on and by March 1973, Hanson claimed that 21 leases had been signed with tenants, filling about 60% of the 150,000 square feet (14,000 m2) of retail planned for the mall upon completion, projected for sometime that Summer. The Law Company of Wichita, Kansas handled construction of the theater and mall from its own architectural plans. Local firms Wick Construction Co. and Douglas Mulvanny, Seattle architect, were in charge of the construction and design of tenant spaces.

Things began to fall apart for the developers when, in 1974, White Front declared bankruptcy and shuttered its large store at the mall, the last one in the state to close. Investors soon became wary of opening stores at the mall. After much delay, the Everett Mall finally opened in October 1974 with only one anchor tenant and little more than half of its stores occupied. The mall resembled a ghost town and was not actively promoted by its owners. The atmosphere of the mall at the time was described by The Seattle Times in 1977:

Fortunes began to turn around when The Bon Marche purchased the former White Front store in 1976 with plans of moving their store from downtown Everett. An opening was set for February 25, 1977 Soon after the Bon's announcement, new retailers began to move to the mall. At the same time, Roebling Management Company, who managed the mall as a subsidiary of the Hanson group (later known as the Titanic Associates) announced plans to carry out the originally intended plans for the mall, including the third anchor store. In August 1977, construction began on the second triplex theater at the mall just east of Sears, to be operated but not owned by General Cinema. At that time the theater was a stand-alone building.

Construction of the mall's new $20 million east wing began in the fall of 1979 and was completed by the fall of 1980. The new addition officially opened on Friday, August 1, 1980 fully leased. The centerpiece of the expanded mall was the two-story, 120,000-square-foot (11,000 m2) Frederick & Nelson department store, the Marshall Field subsidiary's 15th store, designed by Beverly Hills architects Martinez, Takeda & Hahn. The addition also contained a 39,000-square-foot (3,600 m2) Payless Drug store and 52,420 square feet (4,870 m2) of mall shops. The mall's tenant mix remained stable until 1992 when Frederick & Nelson declared bankruptcy and the Everett store closed. It was immediately replaced by California-based Mervyn's department store who took over Frederick's lease in 1991. After a major remodeling, that store opened on July 19, 1992 to much fanfare.

In 1998, Everett Mall's management, Hampshire Management Co., submitted plans to the City of Everett for a major expansion that, if carried out, would rival Alderwood Mall in size. Under the plan, 275,000 square feet (25,500 m2) of retail space would be added as well as a new multiplex theater, a hotel and multiple restaurants. These plans soon became jeopardized when a financial crises hit the owners.

During the fall of 2000, the Everett Mall was placed into receivership by the Snohomish County Superior Court after finding that its owners, Titanic Associates of Morristown, New Jersey had defaulted on a loan. By 2001, Titanic had amassed $61 million of debt and were facing foreclosure of the property. To eliminate the debt, they deeded the mall to the Equitable Life Assurance Society of New York, who assumed operations. By the end of the year, Equitable hired Madison Marquette to manage the mall and direct its expansion.

In 2003, expansion plans resumed. This time with over 227,068 square feet (21,095.3 m2) of new retail space including a new "power center", the Everett Mall Village, and major exterior renovations planned. Construction began in 2004 In June 2004, Equitable sold Everett Mall for $50.2 million to Steadfast Commercial Properties of Newport Beach, California who proceeded to replace Madison Marquette with their own management company to carry out the expansion.

The expansion project known as Everett Village broke ground in November 2004 with Best Buy, PetSmart, Old Navy, Borders Books and Bed Bath & Beyond announced as future tenants. Once completed in 2007, Steadfast sold the Village for $21.7 million to SJ Realty Investments of Ohio. SJ Realty sold the Village for $22.5 million in 2015 to San Francisco-based Stockbridge Capital Group, which then sold it to another California-based company, Argonaut Investments, for $24.85 million in 2018.

With the expansion, Regal Cinemas also committed to building a 16-screen cinema. Regal was the operator of the existing theaters at the mall when the expansion was announced due to AMC Theatres backing out in January 2003 with the end of their lease approaching; AMC had assumed the theater operations with its acquisition of General Cinema in early 2002.

In late 2006, Mervyn's announced that it would shutter all of its Oregon and Washington locations and later declared bankruptcy. The Everett store was divided in half between an LA Fitness and national discount family clothing chain Steve & Barry's. A year later, Steve & Barry's declared bankruptcy and closed all locations, with the vacant space at the Everett Mall occupied by Burlington Coat Factory since September 20, 2013. Steadfast defaulted in 2012 on a 10-year, $98 million loan for the mall which it took from the Royal Bank of Canada in 2007. Steadfast avoided foreclosure on the mall, having Canyon Partners, a Los Angeles-based investment group, join ownership over it the following year.

Macy's closed its store at the Everett Mall in 2017 and was replaced by Floor & Decor the following year. In October 2017, Brixton Capital, an affiliate of Brutten Global, purchased the property for an undisclosed price from Steadfast Companies and Canyon Partners; JLL took over the mall's management and leasing with the sale. On August 31, 2019, it was announced that Sears would be closing their Everett location in December 2019. Bed Bath & Beyond followed suit, announcing on September 18, 2020, that they would close their store in Everett at the end of the year.

All content from Kiddle encyclopedia articles (including the article images and facts) can be freely used under Attribution-ShareAlike license, unless stated otherwise. Cite this article:
Everett Mall Facts for Kids. Kiddle Encyclopedia.