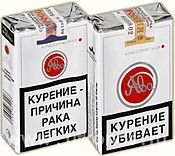 Excise stamps of Russia affixed to packs of the Java cigarettes

Selling of goods subject to this law without affixing excise stamps is prohibited in the territory of Russia since 1 January 1995.

The law was amended by later decrees of the Russian Government.

An excise stamp of Russia issued in 1994 for labeling wine

All content from Kiddle encyclopedia articles (including the article images and facts) can be freely used under Attribution-ShareAlike license, unless stated otherwise. Cite this article:
Excise stamps of Russia Facts for Kids. Kiddle Encyclopedia.