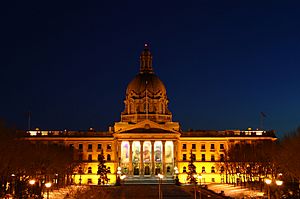 The Lieutenant-Governor of Alberta, as representative of the Queen in Right of Alberta, heads the council, and is referred to as the Governor-in-Council. Other members of the Cabinet, who advise, or minister, the vice-regal, are selected by the Premier of Alberta and appointed by the Lieutenant-Governor. Most cabinet ministers are the head of a ministry, but this is not always the case. In the construct of constitutional monarchy and responsible government, the ministerial advice tendered is typically binding, though it is important to note that, despite appearances of the contrary, the Royal Prerogative belongs to the Crown, not to any of the ministers,

As at the federal level the most important Cabinet post after that of the leader is Minister of Finance. Today the next most powerful position is certainly the health portfolio which has a vast budget and is of central political import. Other powerful portfolios include Education and Energy.

The current Government has been in place since May 24, 2015, following May 5, 2015 Alberta general election. Members are listed in order of precedence. There was a cabinet shuffle on October 22, 2015. A second shuffle occurred February 2, 2016. A third shuffle occurred January 19th, 2017.

In Alberta, the ministries' names have two forms, often coexisting. The usual one is "Alberta X", (e.g. Alberta Education) the older style is "Ministry of X" (e.g. Ministry of Finance). The newer style without the word "ministry" resembles the federal government's Federal Identity Program and the federal naming scheme, except in reverse order. Federal ministries and departments are usually "X Canada" (e.g. Environment Canada).

With every new cabinet ministries can be created or disbanded, renamed or gain or lose responsibilities. Some ministries such as finance or health are common to all provincial governments and are comparable to similar ministries or departments at the federal level or indeed even in other countries. However, some ministries are quite distinct to Alberta, such as the Ministry of Sustainable Resource Development which oversees the management of public lands.

These are the current ministries as of 2015[update], listed alphabetically, with a short description and any notes to changes to that ministry's mandate.

Between 1982 and 1992 the federal government favoured devolution of powers to the provinces, culminating in the failed Meech Lake and Charlottetown accords. After a merger with the heavily devolutionist Canadian Alliance, the new Conservative Party of Canada under Stephen Harper has continued the same stance.

All content from Kiddle encyclopedia articles (including the article images and facts) can be freely used under Attribution-ShareAlike license, unless stated otherwise. Cite this article:
Executive Council of Alberta Facts for Kids. Kiddle Encyclopedia.